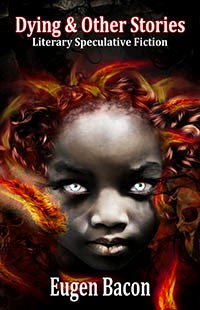 “Literary fiction” often carries certain connotations, chief among them a focus on language, character, and theme at the expense of plot. Since detailed storylines and high concepts are often integral to speculative fiction, “literary speculative fiction” could be considered a contradiction in terms. Such a self-applied label is intriguing.

Prior to reading this short story collection, my only acquaintance with Eugen Bacon’s work was “A Mage’s Prophecy” in Andromeda Spaceways Magazine #68 (co-authored with E Don Harpe), which tells the tale of a mighty warrior king whose life is turned upside down after he encounters a beautiful woman on the battlefield. Similar romantic concerns, similarly cloaked in fantasy trappings, figure highly in Dying & Other Stories.

For all its mythological allusions, “Mahuika” is about falling in love with a fierce, hot-tempered woman and what that entails. “A Case of Seeing” is ostensibly a police procedural with a spec-fic twist but is ultimately about letting go of an old love. “A Pale Lure” offers up a cornucopia of indigenous spiritual references as it ponders a charming white man’s effect on two generations of Aboriginal women. And in “Being Marcus,” Brutus (Julius Caesar’s assassin) is condemned to a gentle hell of immortality as a man who can melt women’s hearts but never truly reciprocate their desire. Bacon has a keen eye for the minutiae of relationships and chronicles them in an interesting fashion.

As the title suggests, Dying & Other Stories also contemplates death from all angles, and the lead-off story, “Dying,” delves deepest into it. Most of us have questioned our existence at some point, wondered if reality is a thin film dividing us from something beyond, or if our daily lives are just bad theatre subject to the whims of a malevolent director behind the curtain. Bacon mates this notion with the central conceit from Groundhog Day in a story about an insurance assessor who can’t escape the daily drudge of his life, not even when he is hit by a truck and reduced to “a mural on the pavement: flesh, blood, brain and bile.” The blokey dialogue doesn’t quite ring true—it’s almost as if Bacon is trying to translate a foreign dialect—but, overall, the story is an interesting metaphor for the Christian concept of salvation.

Less high-flown ruminations on death include “Maverick,” a clever piece of flash fiction where a serial killer picks the wrong victim, and “A Nursery Rhyme,” in which a little girl’s rendition of “Five Little Ducks” becomes suspicious and sinister.

None of the foregoing is to suggest the “speculative” part of Bacon’s speculative fiction is tokenistic or absent, and several stories have high concepts. In “A Man Full of Shadows,” ground-breaking technology alleviates crippling post-traumatic stress; “Entrepreneur” questions the healthiness of the world’s technology obsession and asks where it might lead; television satellites become God in “Realtime TV,” a satirical re-imagining of “The Story of Abraham;” and in “Gaze of the Phoenix,” a beautiful brooch hides a dark secret.

The way Dying & Other Stories experiments with language is particularly ambitious. Sometimes this experimentation gives the prose a dazzling luminescence; other times it makes it difficult to read. Take this line from “A Nursery Rhyme:” Inward pulled pupils in his eyes bulging off the socket. Not only is “bulging off the socket” just an attempt to re-imagine “bulging out of their sockets,” it also makes no sense—if there are two eyes, surely they would be “bulging off their sockets.” The same is true for Dragon is on pristine behaviour from “Wolfmother”—it’s a self-conscious attempt to rework “best behaviour.” Now contrast those trying-too-hard examples with this simple descriptive sentence (also, ironically, from “A Nursery Rhyme”): “Breakfast is an egg, a weeping yolk.”

No, it’s when Bacon lets loose with her voluptuous gift for language rather than overthinking it that her stories shine. This is especially evident in the vignettes and flash fiction—small, intricately cut jewels that are all about effect, such as “Between Channels,” where a dog in a small town brings its master a severed human arm, or “Allure,” an evocative story about a man’s tryst with a woman who has “warm stars in her eyes.”

Consider the book’s subtitle a forewarning, then: Dying & Other Stories is not a beach read or a rollicking collection of speculative fiction yarns. You’ll want to come to its pages with at least a passing knowledge of history, mythology, religious texts, science, and the occult to fully appreciate it. This is a book to curl up with on a rainy winter afternoon, when you can give each story its due and reflect on it afterwards.