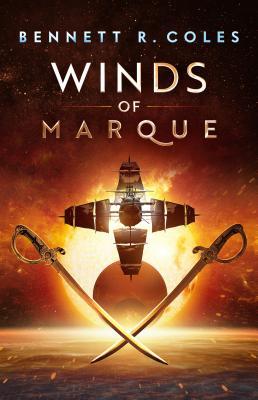 Science fiction readers expect a touch of strangeness in their literary landscapes. Most fans crave that off-kilter something that makes a book memorable. In Robert Charles Wilson’s Spin, for example, there’s a time-distorting shield that covers the Earth. In the quasi-religious Dune series, there are catchy names like Kwisatz Haderach and Harkonnen. Writers may even present the absurd (like, say, a giant worm with a human head), but they’ve still got to ground the absurdity within the story to keep us reading.

Bennett R Coles, in his new space opera, Winds of Marque, chooses realism over conceptual risk-taking. Coles, author of the “Virtues of War” series, brings fifteen years of experience as a Royal Canadian Naval officer to his writing. He succeeds in a detailed rendering of how ranks interact, blended with how interstellar mercantilism might proceed.

The star of Coles’s drama is Subcommander Liam Blackwood. Liam is a nobleman committed to professionalism, while others in his social sphere use their privilege to tear up the space-ways. In the opening sequence, he employs technical subterfuge to prevent his captain, Lord Silverhawk, from totalling the cruiser Renaissance. Silverhawk races against Lord Longridge and the Celebration, through solar winds and toward the planet Passagia. On Passagia, they attend a ball, each hoping to “claim the first dance with Her Royal Highness”—a grandchild of the Emperor.

Rear Admiral Grandview calls Silverhawk’s stunt “idiocy of the highest order.” He then pairs Liam with Commander Sophia Riverton for a mission so secret that they’ll be disavowed if caught. It involves clearing pirates from His Majesty’s shipping lanes in the Silica Sector. They’ll use a test ship called Daring, assemble their own crew, and possibly run afoul of Sectoids—insect-like aliens with whom war is imminent.

Joining this mix are Master Rating Amelia Virtue, the plucky ingenue who helped Liam save the Renaissance, and a young noble named Highcastle, Silverhawk’s cousin whom he insists join what looks like a test run. Sublieutenant Templegrey and Chief Petty Officer Sky, among others, round out the crew. However, they do throughout the narrative what their living counterparts might on an actual Naval mission—facilitate the action without leaking a trace of personality.

During an otherwise sharp set-up, Coles offers little backstory on the Empire. Can we root for them, or are soldiers crushing the natives of some frontier moon as we speak? One hint lies in the fact that aliens—including allied species like the reptilian Theropods—are casually referred to as “brutes.” Later, Riverton confirms a bland, anthropocentric view of the galaxy by saying, “In many ways we’re more complicated than any of the other races.”

A statement of this magnitude certainly feels true in light of the Sectoids. They read like a winking sci-fi pastiche, with “arms like swords” and the ability to “spit acid from five paces.” Coles uses the threat, but hardly ever the presence, of his killer space bugs to keep the action simmering. Daring masquerades as a merchant vessel while hunting pirates and investigating Lightning Louise, a ship they’ve raided. The crew also spends time in Windfall, a planet-side den of swindlers that would make the citizens of Deadwood blush. After several alternating beats of action and rest, the plot yields its juiciest morsel. “Justice will prevail,” says a pirate they’ve captured, “when the dark star rises.”

The mystery of what—or who—dark star is provides the second half of Winds of Marque with valuable propulsion. The problem, however, is spending time with these lightly-sketched characters. Highcastle, an entitled boor, embodies all the condescension and womanising that the role entails; his potential as an active villain is wasted. Riverton has a secret, but it leads to a kind of narrative cubicle where we stare at the walls and ask, “Is this it?” Liam, eventually noticing that Amelia is a woman, “watched her for a moment, admiring her lithe form and the way her dark hair framed her face,” and approaches her with “a feeling he could no longer ignore.”

Coles is far too timid with his creations. Naval regulations seem to hover over the novel, keeping everyone well-enough behaved so that when bad things happen, ready solutions prod the mission forward. Readers entertained by a tale so slick that no drama sticks will await book two. Others may want to ship out for more colourful space.