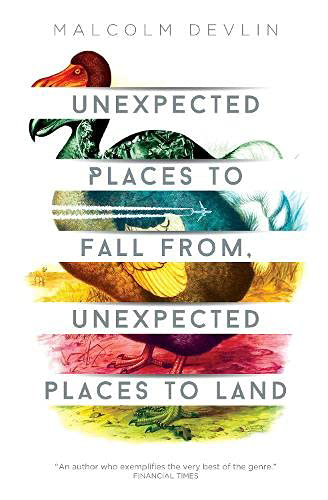 The dodo bird was too dense to live, or so popular myth suggests. The flightless native of Mauritius was hunted to death by visitors to the island in the 16th and 17th centuries. The birds, unfamiliar with predators, couldn’t escape their sudden appearance. They also laid only one egg at a time, fatal to any species in need of rapid population replenishment.

Supremely unlucky, rather than stupid, is perhaps a better description of the dodo. Malcolm Devlin (You Will Grow Into Them, 2017) backs this assessment in his new story collection Unexpected Places to Fall From, Unexpected Places to Land. Several of the tales feature the character Prentis O’Rourke, who dies in every timeline in which he exists. In “The Purpose of the Dodo,” we learn that his wife Laura works for the Landry Institute, which monitors death across timelines and has noticed the “rare cosmic anomaly, at sixteen minutes past eight on 16 October 2019,” during which millions of versions of Prentis died of various causes. A comprehensive listing even claims that one accident involved a toilet seat.

Death is on Devlin’s mind, even before this Monty Python take on quantum mechanics’ Many-Worlds Theory. The first line of the first story, “We Are Now Beginning Our Descent,” is, “I have always dreamed I would die in an aeroplane crash.” The narrator, not Prentis this time, ruminates on the potential grandeur of dying memorably in a front-page incident. Other stories grapple with dark philosophical motifs, like “The New Man” and “Five Conversations with my Daughter (Who Travels in Time). The first sees Prentis killed while working in a warehouse, only to have his mind imperfectly downloaded into a younger body. The second involves Carrie, Laura and Prentis’s young daughter, whose adult mind visits her child body in a form of time travel. Both stories involve family dynamics and high emotional stakes, effectively showcasing Devlin’s knack for Weird Fiction.

The trilogy of stories “Walking to Doggerland (1-3),” however, prove better connective tissue than anything with Prentis. They feature the sisters Veronica and Penny, who are visiting their older sister, Lulu, at the family’s former summer cottage at seaside Bryhanton. Lulu, her career as a famous photographer behind her, has purchased the cottage. But she’s letting it rot, allowing black mould and junk to proliferate. Authorities have placed her in a care home, and Veronica and Penny have come to sort the situation.

While stories like “The New Man” have the high-concept gloss of a Black Mirror episode, they possess a flip-book quality imposed by the short story format. There are cynical gut punches, like when Prentis learns why his mind doesn’t feel his own:

If you’re missing anything, maybe they couldn’t fit it all in. We both work in manufacturing; we both know how it works. The punter wants to pay less, so you cut corners and then spring them with an upgrade fee when they notice. You got the basic model. No frills. No extras. Don’t look so surprised, they’re running a business here.

Yet the “Doggerland” stories, exploring how physicist Antonia Landry raised—or failed to raise—three very distinct daughters, creates a natural, weightier emotional through-line that captivates with ease. Penny, who entered a convent to simplify her life down to a handful of repetitive essentials, is perhaps, surrounded by science fiction stories, the volume’s most compelling character. She leaves the sisterhood after decades, but once she revisits the beaches of her childhood, she’s reminded of a dog named Oscar they once knew. She and Veronica spent time following Oscar around, unsure if the dog belonged to anyone. Being on an adventure with Oscar, envisioning Doggerland as some kind of magical realm, the girls sing a paean to childhood, when anything is possible.

Between the great stories, Devlin places some odd sketches of travelogue and/or creepy motifs. “We Can Walk it Off Come Morning” places travellers Aleyna and Jack in a fog so thick that the outside world loses permanence. “The Knowledge” reminds us that human cities like London, which the best cab drivers will memorise, are scaled-up rat warrens. The final story, “Talking to Strangers on Planes,” creates a figure-eight with the opening story. We learn more about the man who dreamed of dying in a plane crash, and to whom he spoke at the airport. Conceptually, it feels like Devlin is inviting readers revisit the stories out of order someday, to glean deeper connections. To place our feet in the sand and see where the dog prints lead next time.