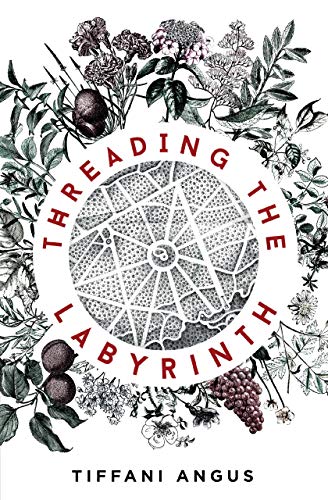 “I know nothing about gardens.”

These are the words Toni Hammond thinks when she discovers she has inherited an ageing, broken-down manor in the English countryside, alongside a wild and untamed garden. I can relate: I also know nothing about gardens. But by the conclusion of Dr Tiffani Angus’ debut novel, I had a new appreciation of them.

Threading the Labyrinth is a historical fantasy novel, bordering on the edge of fabulist fiction. Set over the course of 400 years, it is the story of people, usually women and sometimes related to each other, who work in an aristocratic family’s garden. In 2010, American gallery owner Toni travels to England to deal with an estate that’s been dropped into her lap and discovers a garden where time has no meaning. In the 1600s, Joan and other garden workers contend with a new head gardener while Joan becomes increasingly distressed in her marriage. A century later, Thomas returns from war to find his sweetheart has married his hostile brother and endeavours to find his place in the garden. In the 1860s, Mary learns photography from her peculiar aunt while an artist attempts and fails to paint her and the bewildering garden. And in 1941, Irene, once an actress, finds herself working as a Land Girl for the war effort and becomes captivated by the mysterious figures only she can see in the garden.

Angus successfully weaves these stories from different centuries together, seamlessly shifting the tone and writing for each new time period. What brings each distinct story together is the ever-present garden, and the magic and influence it holds over the characters’ lives. While readers might be confused by the title—as there is, technically, no labyrinth to be found—the labyrinth is a metaphor maintained throughout the book for the characters undertaking a journey of self-discovery.

I admire the ways in which this book is structured. At first, it seems the unchronological order of the chapters has no meaning, but you soon begin to piece together how figures and objects from different time periods relate to the story as a whole—a crashed plane that seems to flicker in and out of existence, or a man in a green velvet jacket that disappears in the blink of an eye. It’s marvellous fun for the reader, a bit of Sherlock Holmes-esque time travel detective work.

In typical English literature, stories about fancy manor houses are commonly about the lords and ladies who own it. But in Threading the Labyrinth, the titled, upper-class family that owns the Hertfordshire home remain unnamed and unimportant, a mere backdrop to the real stars of the novel: the ordinary people who find themselves working in the garden, whether because their family has done so for generations, or because their life’s circumstances have brought them there. I was particularly moved by Irene’s chapter, predominantly her friendship and solidarity with the women in her life. I enjoyed untangling the eerie plot surrounding the hidden figures of the garden and how they relate to the story as a whole, as well as learning about English women’s roles at the home front during WWII. While I enjoyed each chapter, my only criticism is for Joan’s chapter, which lacked structure and obscured the plot.

Threading the Labyrinth was clearly written by an expert on gardens, so I wasn’t surprised to find Dr. Tiffani Angus studied English garden history. Angus’ emphasis on the power of a garden as a communal space was fascinating to read, especially as the garden draws people to it across centuries. In fact, it often felt as though the garden itself was a character, being that it completely pervaded characters’ lives in search for someone to simply tend to it.

Threading the Labyrinth is the story of the decay and subsequent rebirth of a garden, mirrored in the people who care for it. It’s a romance, a fairytale, and a horror story all wrapped into one. If you’re looking for a gentle fantasy novel, this book is for you.