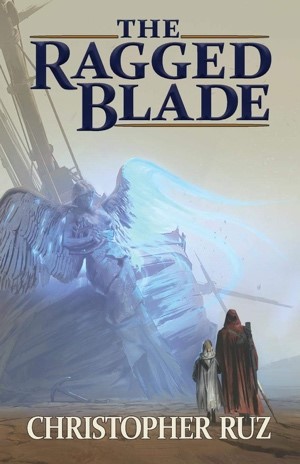 My introduction to Christopher Ruz’s fiction came with his exceptional dark fantasy story “Pan,” the best of a good bunch in Andromeda Spaceways #62. It went on to be nominated for an Aurealis Award in 2017, a surprise to no one who had read it. While Ruz’s fantasy novel The Ragged Blade doesn’t quite reach such lofty brilliance, it isn’t far off.

The hero, Richard, is a skilled but ageing solider who finds himself on the run through a harsh desert landscape with his daughter, Ana, whom he barely knows. They are fleeing the Magician, a charismatic but dangerous man, who was also, in his more gullible and impressionable years, Richard’s lover (his sword swings both ways). That was when the Magician convinced Richard to help him overthrow the king, then installed him as his First Blade, a prestigious but murderous role. In the present, the Magician wants Ana for his own nefarious purposes, although Richard doesn’t understand why.

Also pursuing Richard and Ana is the Culling, a monstrous dog-thing the Magician cobbled together from spare parts and brought to life ala Dr Frankenstein, albeit with dark magic rather than lightning. Richard wants to track down the demon Alucia and return its heart (which the Magician and his merry band of raiders stole from a towering enchanted termite mound, and which Richard stole from the Magician) in the hope the demon will be grateful enough to get the Magician and the Culling off Richard’s and Ana’s tails.

It isn’t much of a plan, something Richard is the first to admit. He is the most self-loathing protagonist you’ll find this side of the literary catalogue, and his regrets, most of them a product of his blind devotion to the military and the Magician, are legion. Aside from leading to the perilous situation in which he and his daughter now find themselves, it has also cost him two true loves and a fistful of close friends. This makes him understandably jaded and mistrustful, so he accumulates few allies during his quest. Those that assist him usually do so because they feel empathy for Ana, who helps right Richard’s broken moral compass.

The Ragged Blade is epic fantasy with grim and gritty overtones; one could almost call it fantasy noir. It is not for low attention span readers, with the first 150 pages given over to extensive scene setting, world building, and flashbacks. Richard’s past may intrigue readers, and his back story adds information crucial to the present narrative, but these reminiscences do have a habit of intruding when the reader just wants to get on with things.  In consequence, Richard sometimes comes across as the classical old man boring everyone to death with war stories (and Ana’s avid interest in these tales stretches credulity). It’s also fair to say that Kevin Smith’s gentle criticism of The Lord of the Rings—it’s about people walking—applies to The Ragged Blade.

Even in the ‘slower’ parts, though, Christopher Ruz’s beguiling prose ensures total investment in his characters and the austere desert milieu they endure in their quest to reach the Demon’s Needle. Typical sword-and-sorcery lavishness is all but absent in The Ragged Blade, so when occasional high-fantasy set pieces do appear, they are all the more dazzling. Take, for example, Richard and Ana’s first sighting of a petrified ship (depicted in the novel’s stunning cover art): “A frigate built low and wide for cargo. Three tall, bare masts like winter-stripped oaks, cannon-sits propped open, rowboats upturned on the deck… Storms had blown sand as high as the first line of windows. The portholes were tired black eyes.”

Then there is their claustrophobic and horror-laced trek through the Knives, a narrow canyon filled with spire-like rock formations. Chasing down Richard and Ana are not only the Culling and an aggrieved warlord and his men, but some malicious fauna native to the canyon. “Blood rose in a mist on the wind. The deppara were a writhing blanket across Styrn’s chest, and as they squirmed and scuttled Richard saw red flesh and white fat, bone and marrow and one eye open wide, staring, desperate.”

Once the players and the stakes are laid out, Ruz plants his foot on the narrative gas pedal, and the final hundred pages roar with action and suspense. Come the final paragraph, the reader has just as many questions as answers—The Ragged Blade is the first in a three-book Century of Sand series—but the ending is nevertheless tidy and satisfying. I will be buying book two when it is published in July. If you haven’t already, I highly recommend buying book one.