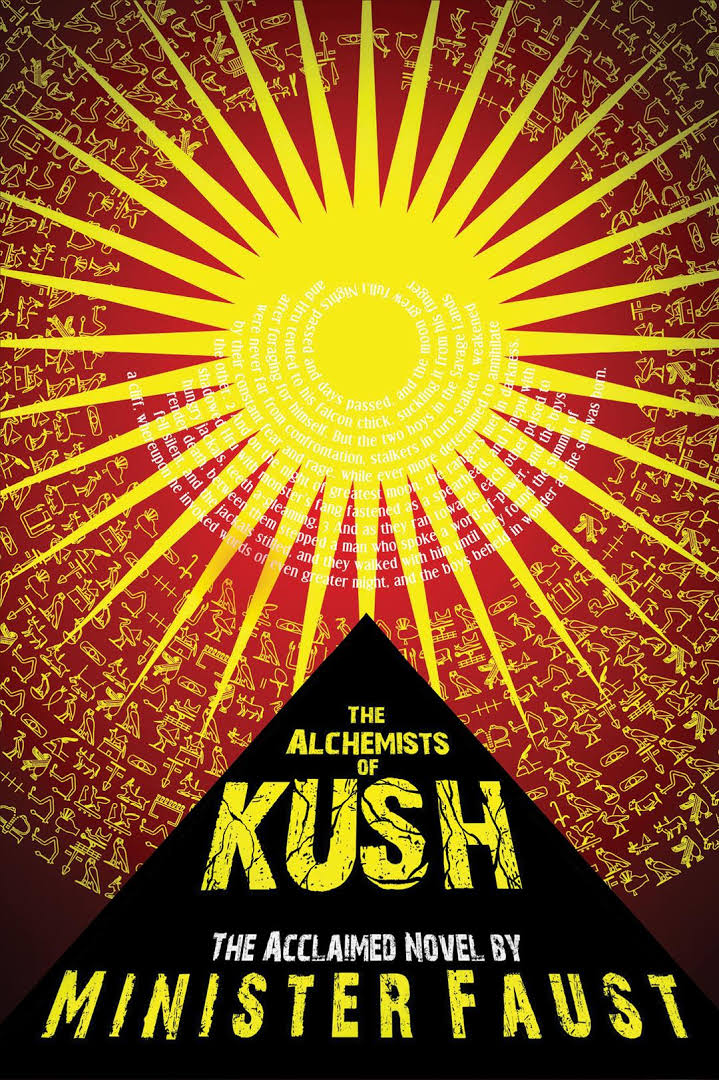 The Alchemists of Kush

The Alchemists of Kush

Minister Faust’s, The Alchemists of Kush, is not a book whose category you will find easily. It’s simultaneously many things. A coming-of-age story and an act of myth-making (or perhaps an act of myth-remixing); an allegorical work inspired by the history of the Nation of Gods and Earths; and a contribution to the Imhotep-hop subgenre; this is a novel that brings together an ambitious range of materials. Admirably successful on a variety of levels, the only major flaw of this work lies in its difficult relationship with violence.

The novel alternates between two linked stories, “The Book of Now” and “The Book of Then,” stories that mirror, and often nuance, one another as the narrative progresses. “The Book of Now” centres on a young man from Edmonton, a first-generation expatriate/immigrant/refugee from a family with roots in Somalia and Sudan, and his experience of self-transformation under the tutelage of one Mr. Yimunhotep Ani (or “Moon”). The friendship and guidance of Mr. Ani/Moon, as he initiates a group of young people into the mysteries of Kemetic alchemy, is artfully described and very moving, though the young man’s initial decision to pursue alchemy is rushed, which ultimately comes off as unconvincing. The companion story, “The Book of Then,” which is written in a terse, quasi-scriptural style, acts as the origin myth for the first book’s alchemical teachings and is frequently cited by characters in the “Book of Now.”

There is far more in this book that I found admirable than not. It is a politically committed work that strives for sincerity and complexity, while maintaining a fundamental optimism throughout; one that did not fail to influence my (habitually cynical) thinking. It is also, for the most part, extremely well-written, and is filled with sympathetic, carefully drawn characters who face realistic problems. In fact, the challenges faced by the characters are unexpected precisely because of their everyday qualities; while wars rage between beasts and children in “The Book of Then,” the characters in the “Book of Now” find their struggles in the guise of parents raising autistic children, young men struggling with homophobia, and martial artists questioning cultural appropriation. There is violence, viscera, piss, intestines and shit, and plenty of it. But, in the end, this is a book about the rejection of violence, and about how one might find peace through the transformation of the self in opposing vengeance.

This said, while having provided the reader with a beautiful and profound meditation on the complexity of violent acts, Minister Faust has also provided us with main characters that are, albeit nuanced, nevertheless narrowly good. The Alchemists of Kush is centered on a heroic vision of salvation, one that is paradoxically underwritten by the aesthetic allure of martial strength.

This occasionally shallow artistry would be par for the course in most speculative fiction, but the very sophistication of Minister Faust’s project, and the novel’s narrative scaffolding, sets itself the task of providing a kind of narrative resolution to violence itself. It’s a tall order, and I wasn’t wholly satisfied; but I also think that Minister Faust is aware of this contradiction—thus the central role of comic books in the novel—and I believe he struggles to overcome it.

No matter how this book may measure up against its own internal logic, as a mark on the map of SpecFic it is a fortress of pure gold. I hope that the highest compliment I can pay this book is that it made me think. What’s more, it inspired me to learn a great deal while reading, and I discovered many things about the historical kingdom of Kush, and Sudan, and Somalia, and Edmonton,

In some ways, the flaws of The Alchemists of Kush are not so much failings of the story as they are part of the dilemma of revolutionary violence itself, which draws nourishment from a tough guise. In any case, this novel is a pleasurable and transformative work. And there are anteater people. Yes, you read that right, anteater people. Now go read this book.