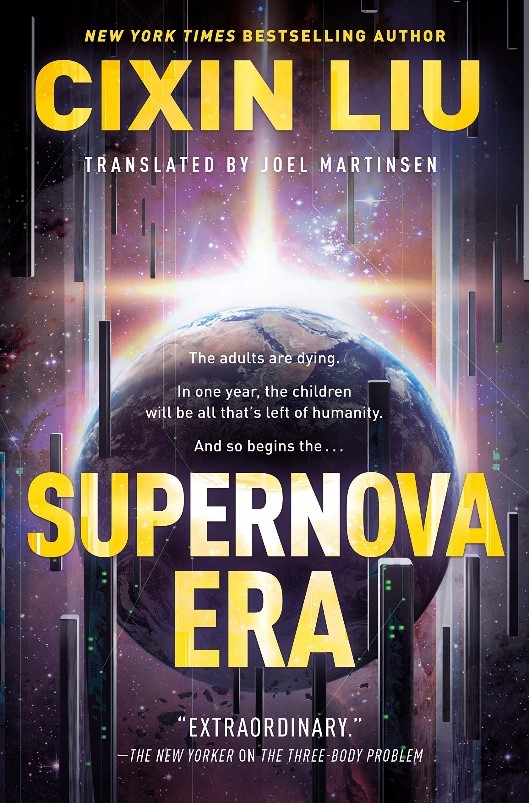 “Everyone above the age of thirteen would die, and Earth would become a children’s world.” This is the premise of Cixin Liu’s Supernova Era. Liu settles into the story with a detailed account of the Dead Star, which was born out of “atomic motion and radiation” from the centre of a mothering nebula. In copious amounts of time, the star grew to be a staggering size. Next to the Dead Star, “Earth was like a basketball tossed into the Pacific Ocean.” But the people’s admiration of the star was short-lived. Its collapse sent energy and radiation hurtling toward Earth, resulting in the destruction of important chromosomes within human cells. In consequence, regenerative capabilities only allowed those aged thirteen and under to survive. They had one year to prepare.

The adults, in their consistently diminishing state, were forced to teach their kids how to survive. Liu covers every aspect of this circumstance, bringing up philosophical questions like: How do we choose who governs our countries and our cities in a case such as this? Who would take over the arduous work of taking care of babies, the difficult task of engineering, or the unsettling job of surgery? Are children capable of doing these jobs? What of their mental state, or their lack of emotional support? While Liu considers all these predicaments, the solutions he offers may better reflect how the world might accurately handle a situation, rather than how the world should handle a situation. In reading Supernova Era, you’ll find a lack of childcare providers after the Dead Star’s attack. You’ll find child reporters, cooks, barbers, and mailmen who were all urgently taught jobs that prove unnecessary for a world full of children (yet they lack the skills needed for raising the abundance of uncared-for toddlers). You’ll also find squeamish child-surgeons who took on the job simply because it was what their parents had done.

Labelled as science fiction, the novel entertains a theme of technological development with which readers’ only gripe may be that the first sign of such advancement does not appear until well into the children’s journey. Readers may find that these technological advancements could have assisted the adults in turning the world over to the kids. Instead, the technology was introduced briefly in the adults’ last days, and re-introduced every time the children had a crisis they couldn’t seem to solve on their own.

While we can’t pinpoint exactly what humanity would do in such a situation, we can logically discuss Liu’s consistency in his twelve and thirteen-year-old characters. When a group of middle school graduates takes part in a simulation of governing a country, a thirteen-year-old boy suggests a name for their imitation country. “Let’s call it Sunland!” he says. The class then draws—and colours—a flag sporting a big red happy face that represents the sun. In a later chapter, the same boy lets out the endearing words, “Is there something wrong with letting others see me for who I really am?” The difference in maturity between just these two sentences leaves readers with an unreliable feel for who the characters are as individuals. Some of Liu’s characters are regretfully underdeveloped and unreflective of children in general, although the subtlety of the children’s growth from the beginning of the novel to the end is commendable.

Aside from some formally written first-hand accounts, the book takes on the guise of a textbook. While interesting and informative regarding Liu’s theoreticalities, Supernova Era provides an unengaging plot for science fiction readers. However, Liu’s novel has several redeeming qualities that are displayed in various passages. For example:

The rain stopped. A fierce wind swept the lingering storm clouds from the night sky to reveal the giant Rose Nebula, which shone with a severe, eerie blue light. When it struck the ground it turned silvery like moonlight, illuminating every detail of the wet landscape and washing out the city lights.

Like this passage, Supernova Era, as a whole, is an impressive reflection of Cixin Liu’s intelligence and creativity.