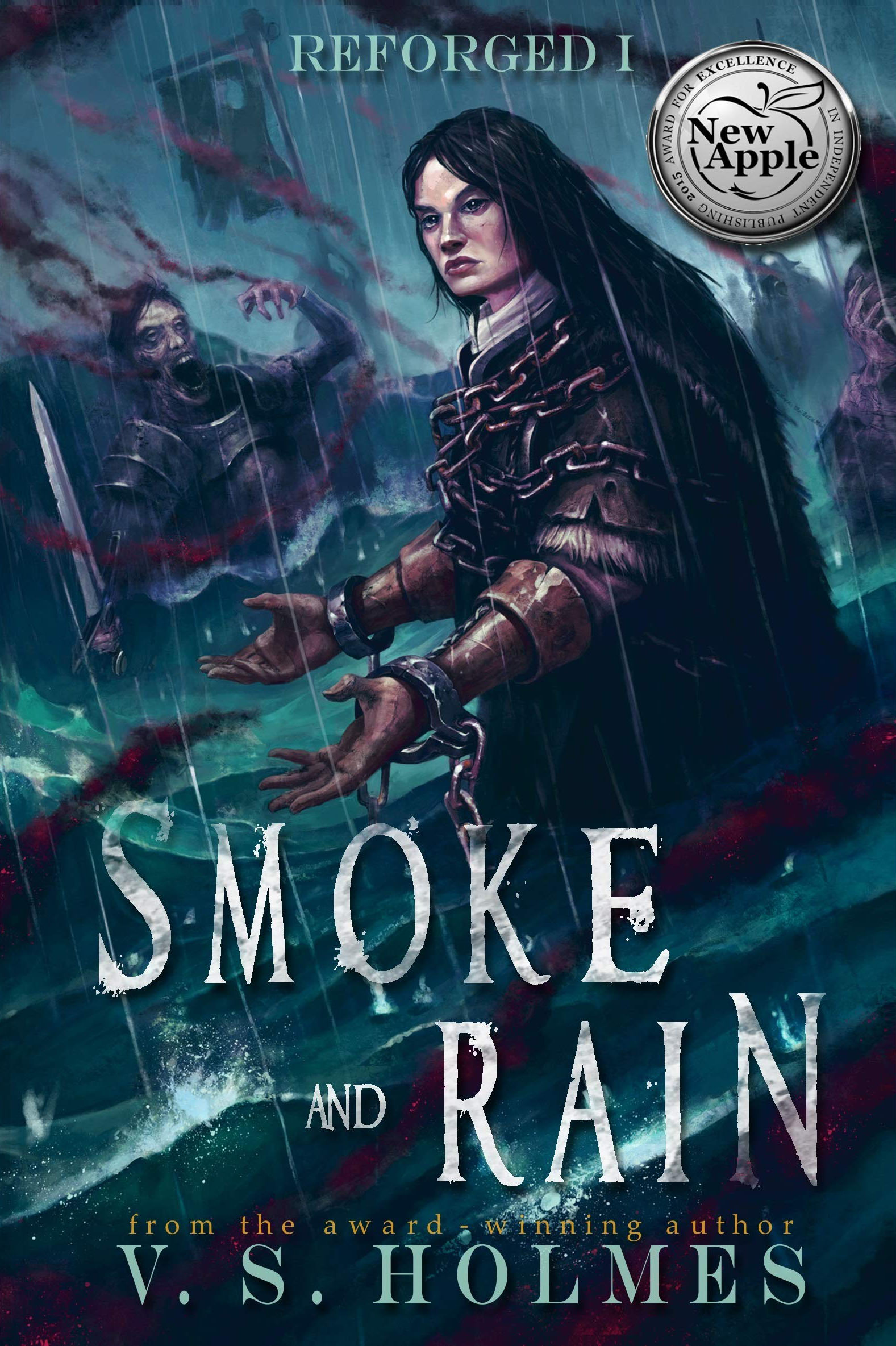 Smoke and Rain: A title that foreshadows the final mind-boggling and epic moments of this fantastical story, while giving nothing away at all. V S Holmes’ thought-out plot points indicate her brilliant storytelling and expert technique.

In a brutal war between the Gods and their creators, Alea and her newfound companion, Arman, find themselves right in the centre. With developing, life-changing power, and a sense of duty, the two join the fight to protect the Laen, creators of the Gods. Gaining allies along the way, Alea and Arman fight for their ancestors in this telling of fate, genocide, and power.

Holmes begins her story right where the action resides. A battle in a distant city has left refugees—including Alea—recovering in a makeshift hospital in Arman’s hometown. While Holmes does a good job of describing the how’s, what’s, and why’s of the war throughout the first half of the novel, it almost felt like I was reading a second novel before the first in a series. With such a great story, perhaps a flashback chapter depicting the beginning of the war between the Laen and the Gods would have given the reader more of an ability to immerse themselves in the picture rather than leave them simply entertained in discovering the details along with Alea and Arman. The mystery-esque vibe Holmes uses certainly satisfies, but could give way to a much more engrossing display of character development. The immediate action laid out prior to Smoke and Rain’s first pages gave hope for continuing action throughout, but the slow mystery in the wake of such action led to an unfulfilling read for the first half of the novel. While a bit lacking, the story is still incredibly engrossing due to Holmes’ variety throughout of characters, conflicting personal relationships, and witty dialogue.

Holmes leaves nothing to be desired within her fancifully constructed setting. From a new calendar with eight seasons, to a new set of swear words and language, and even to unique traits and cultures assigned to different parts of the fictional world, there is no shortage of creativity in her brilliantly put-together universe, which she describes mostly through dialogue. This dialogue, for example, impresses in its alignment with an archaic period, all the while managing to maintain a modern voice. Holmes’ creation is elaborate and converges reality and fiction masterfully.

The presence of a possible love triangle, and the accompanying tension between the three characters involved, presents readers with the ability to predict the novel’s outcomes all too easily. But despite how effortless it may have been for her to settle on a too-anticipated ending, Holmes is seemingly aware, and she exhibits a drastic finish that promises to catch readers off guard and leave them pleasantly surprised. The novel’s brilliant close sets up the second novel perfectly. Although, while the ending was neat and well-closed, most readers enjoy the suffering of a cliffhanger, something left to be desired. Holmes makes sure her readers will want to complete the series, for sure, but she doesn’t leave them entirely captivated and powerless to the all-consuming urgency with which readers scramble to obtain the next novel.

In any case, Holmes expertly constructs her complete creation of Smoke and Rain with the utmost thought and care for detail, especially within her plot, which showcases a perfect amount of danger. The struggles faced by Alea and Arman alone are enough to raise the stakes, but the individual worries of each character and their resultant exchanges add depth and profoundness as the story develops. Finally, being the main character throughout, readers will find Alea’s mind incredibly pleasant to be inside. The struggles that she has and continues to overcome resonate fully within the striking voice Holmes crafts for her, even amid all the others. She is admirable and kind, vulnerable and powerful, and infinitely strong-willed—as showcased in her comical response to Arman’s worrying:

“I wasn’t blundering, and while you may not recognize me covered in blood, most of the         men here would—I don’t wear ball gowns to sew their wounds! And if I get hurt, fault the lonely soldiers, not my drinking.” She wished she could storm off again, but the ground was less steady than before. Instead, she closed her eyes and sighed. “Are you angry with me?”

Holmes’ creation of Alea feels laudable, and Arman’s description fits well for both her and Holmes’ novel as a whole: “Loving her will be your only pain,” but “[she’s] worth all the pain of the fire [she] start[s].”