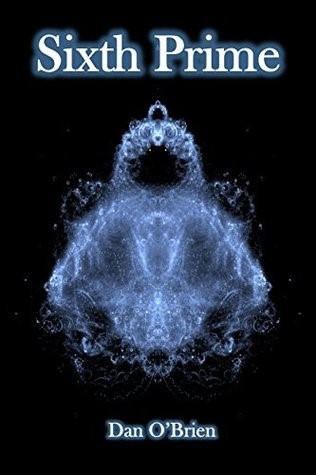 Sixth Prime by Dan O’Brien is a typical space opera, and the premise of “The Prime Saga” is a good one: “Sixteen men and women are connected in a way they cannot yet understand. A murder of a prominent artist begins a chain of events that will ultimately determine the fate of the universe. Only thirteen will remain. In the end, there can be only one Prime.”

There’s the usual ensemble cast—a murdered artist, a courtesan, a private investigator (who falls for the courtesan), a couple of hardened military types, some treasure hunters, and an assassin to list a few. Encompassing all are the Seven Worlds and the Commonwealth and Sovereignty, powerful political and military blocs teetering on the brink of war.

O’Brien claims to be the author of over 50 books, the most recent of which are self-published and available on Amazon, where one customer reviewer has quoted O’Brien’s own words about himself:

I was under an impression—perhaps a misguided one—that led me to believe that being a successful novelist meant attaining a lucrative contract with a top tier publishing house. This is not to say that such an achievement is not my goal. That is hardly the case. What is the case is managing a more realistic outlook on the kind of writer I am right now. I am not a mass product capable of attracting the attention of those kinds of monoliths of the writing industry because my writing does not have that mass appeal so important in that world. As such, I need to cultivate the smaller markets and advertise where I can.

Being able to self-publish is great for authors and provides an egalitarian aspect to publishing that has not existed before. But it also has its pitfalls. Traditional publishing is littered with examples about writers who struggled to get published—Steven King being one of the best examples. But eventually he did.

Self-publishing and the capacity to produce eBooks and online material has meant that more writers are able to find an audience for their work. This can only be a good thing. But if the advent of social media tells us anything, it’s that not everything that gets published deserves to be.

And no doubt some people will find Sixth Prime interesting and entertaining. In a strange way, I enjoyed it too. But, in doing so, I had to suspend belief entirely and not worry about the many niggling defects that ruin the story.

Writers need editors and writers should not edit their own work, at least not just themselves. A new pair of eyes and a fresh perspective is essential for even the most seasoned writer.

Sometimes it’s the little things: “He had been given command… because of his decisive decision-making…”; or the careless sentence structure: “Returning the painting to its stand, he hooked his thumbs into his pants…” Inclusion of the word “After” at the beginning of the sentence would have made all the difference. It’s this overuse of the present participle to begin sentences written in past tense that annoys me the most.

Also, poor characterisation to the point of cliché means Sixth Prime lacks sophistication. Too much is given to quick characterisation, not allowing the reader to explore the nuances of each protagonist as the story unfolds. It defies logic that military leaders so flawed could achieve such high rank. Metaphor is stretched to the point of silliness: “…sharpening cheekbones that could already cut glass.”

The unceremonious unveiling of the assassin’s identity half way through the book, despite the efforts of the poor private investigator, makes you want to give up there and then. What started out as a nice SF crime mystery is suddenly negated, for no apparent reason.

O’Brien’s earlier work has suffered similar criticisms: a good story with a strong premise is ruined by poor writing. And this is only Book 1 of “The Prime Saga.” Let’s hope that later books are better edited.