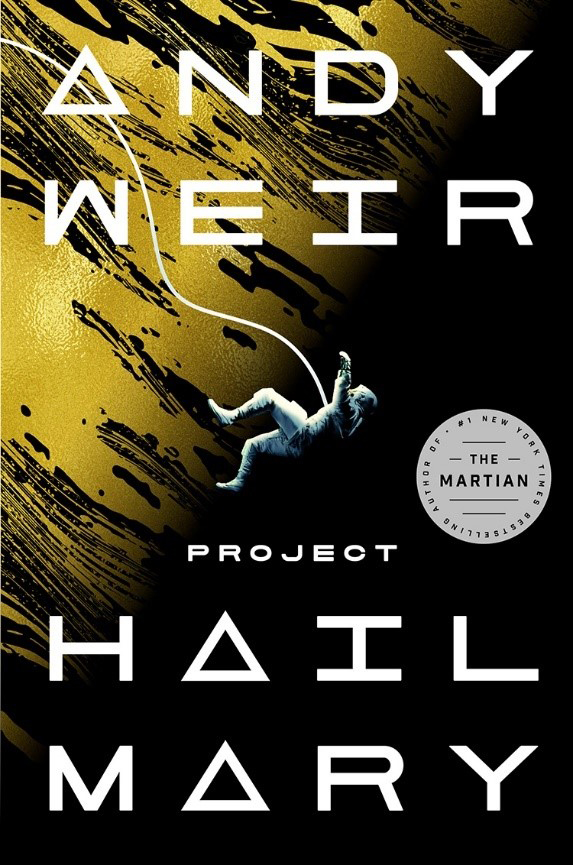 Andy Weir is a giant dork. He knows it, we know it, and the nakedness of this fact contributes fabulously to his success. He realises that prose too dense with scientific explanations, no matter how cleanly written, makes for an adventure colder and drier than Martian dirt. His ability to create characters with DNA from both Homer Simpson and Dr David Bowman (from 2001: A Space Odyssey) brought Hollywood to his door. Matt Damon stars in the adaptation of his debut novel, The Martian (2011), and Ryan Gosling is already interested in his latest, Project Hail Mary.

Weir’s new novel tweaks the winning formula of his first—an astronaut is alone, very far from Earth, and must combine his scientific knowledge and creativity to survive. Ryland Grace, middle-school science teacher, is the hero this time. He wakes from a coma in a secure, sanitary room, except for the two corpses in the beds next to his. He has no memory of how or why he’s there, full of tubes, and attended by robot arms. Once he drags his catheter free, he explores the adjacent lab and does a simple experiment that proves he’s not on Earth.

The initial mystery is set up superbly. Blood from the catheter triggers Ryland’s first flashback, and Weir tosses readers a puzzle piece. The teacher remembers receiving an email from Dr Irina Petrova, a Russian astronomer who’s detected an infrared trail of light that connects Venus and the sun. Further flashbacks (spliced in at perfect intervals with his exploration of the ship) reveal his days before the mission, including a paper he wrote questioning the assumption that life requires water. Sadly, the paper torpedoed his scientific career. Yet Ryland’s outside-the-box thinking also gets him recruited to an international team of problem-solvers who must address the Astrophage.

The what now? At the risk of spoiling some of the treats in Project Hail Mary—don’t worry, these treats are bountiful—the Astrophage is a kind of space algae. Probes return to Earth with samples of the alien organism that travels en masse between Venus and the sun. As they devour the sun’s output, the Astrophage create a problem akin to, but much worse than, global warming. If left to feast, they will cause a deep freeze on Earth within a generation.

Weir strikes an excellent balance between the surprises in his plot and how he deploys them. He typically ends chapters in the story’s first half with an explosive revelation, as in the lines, “This star I’m looking at… it’s not the sun. I’m in a different solar system.” About halfway through the narrative the biggest surprise of all arrives, and from there Ryland tackles increasingly high-stakes technical problems. A diagram of the Hail Mary ship and its moving segments at the beginning of the novel deserves close study because plenty of movement logistics factor into the plot.

The flashbacks possess a skilful dramatic beat of their own. We learn how a not terribly brave teacher, though knowledgeable, ends up in the space boots of humanity’s saviour while numerous trained astronauts stand by. There are also scenes in which Ryland explains basic science to his students, and long-time genre readers may roll their eyes. Here he discusses the global temperature drop:

It’ll be bad. Very bad. A lot of animals—entire species—will die out because their habitats are too cold. The ocean will cool down, too, and it might cause an entire food-chain collapse. So even things that could survive the lower temperature will starve to death because the things they eat all die off.

Unfortunately, Weir must include dialogue like this. Higher on the same page, he reminds those of us who understand climate change that a frightening portion of the United States doesn’t. Regarding carbon emissions and their effect on the atmosphere, one student claims, “My dad says that’s not real.” As an author enjoying massive acclaim and reach, Weir has placed himself in the trenches with Bill Nye and Neil deGrasse Tyson. Their job as science communicators has never been more important, since oil conglomerates are continuously lobbying against common sense solutions to global warming.

The upshot of the sometimes-frustrating dichotomy in Weir’s writing is that children and those who might be intimidated by science topics can enjoy Project Hail Mary. The author casts for as wide an audience as possible by having his hero never swear. “What the fudge is going on?!” Ryland asks, then suggests, “Maybe I have young kids. Or I’m deeply religious.”

It’s easy to envision Ryland Grace surrounded by banks of white tech that both cradle and confine him. Such is the astronaut aesthetic established by film director Ridley Scott in the indelible Alien (1979), which he continued in The Martian (2015). And if the protagonist’s name makes you think Weir perhaps wrote Project Hail Mary with Ryan Gosling in mind, allow this line to put your suspicion to rest: “Why am I so weak when I have these well-toned muscles? And if I was in a coma, why do I even have muscles? I should be a withered, spindly mess right now, not beach-bod buff.”

Weir deserves credit for not cranking out an anaemic, script-like novel, easily digestible in Hollywood. He certainly could have. Instead, Project Hail Mary is an imaginative branching-out of his prior motifs, full of scientific rigor and heart. If and when humanity does live on the moon, reach Mars, or find intelligent alien life, we’ll do so with Weir’s literary boost.