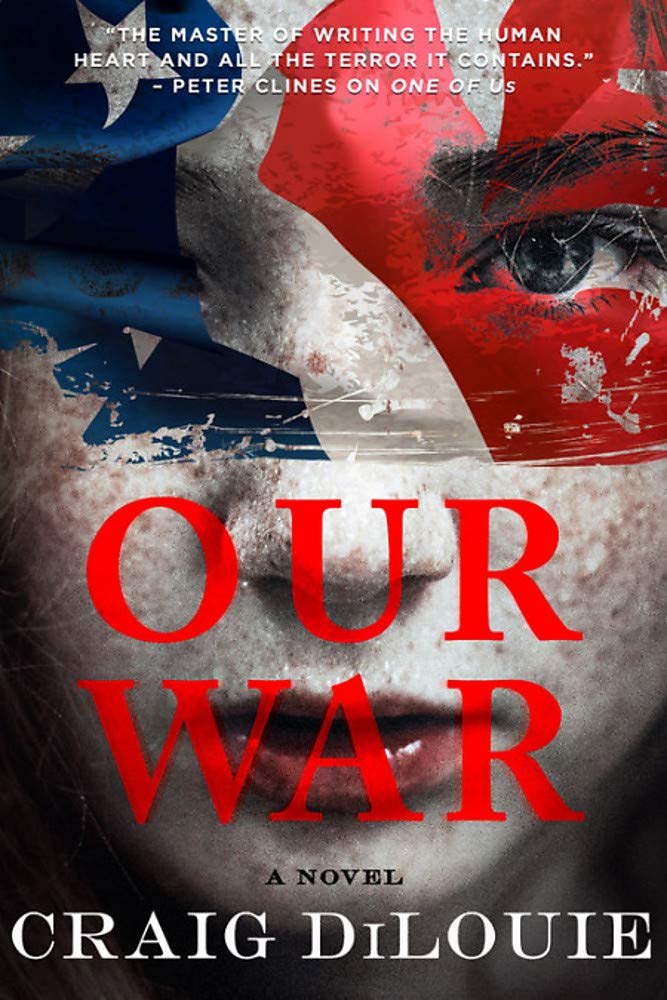 That’s 10-year-old Hannah Miller on the cover of Our War, Craig DiLouie’s latest thriller. Hers is the face of a generation whose childhood is curtailed when the United States, that combustible blend of personal liberty and trust in capitalism, finally blows. DiLouie, author of over a dozen historical, science fiction, and horror novels (including One of Us, 2018), creates an emotional minefield with the premise, “The President of the United States has been impeached, but refuses to leave office.”

Another Civil War follows. Americans in 2019 may continue reading Our War not purely for escapism, but to glimpse a road map of the next few years. Philip Marsh is the villain of the piece, standing in for Agent Orange, as director Spike Lee calls the United States’ 45th President. He’s inspired an “armed protest that snowballed,” pushing Right-wing militias to capture government buildings and battle Left-wing militias along the way.

Hannah’s story began in Sterling, Indiana. She, her parents, and her 15-year-old brother, Alex, had to flee when Right-wingers marked their house with a Venus symbol (as opposed to Mars), indicating their sympathy toward immigrants and single-payer healthcare. Suburban chaos followed, during which Alex fled and Dad got killed. Ten months later, Hannah and her mother share a sliver of curtained-off privacy among refugees at the Indiana Convention Center. Adults mention the war like it’s an “embarrassing mistake.” The front line, however, is only a few miles away.

Alex, in a predictable if not necessary twist, has joined the Liberty Tree Militia. Like most teens, he’s eager to fit in and impress anyone cooler and older than he is. Run by disgruntled Afghanistan veterans Tom and Mitch—who have the training and disposition to carry on extended urban warfare—these soldiers frighten Alex. Yet “as crazy as they were, no matter what they’d done, he found himself glowing at their approval. He was safe again.”

DiLouie explores Liberal and Conservative ideologies not through the Miller siblings directly, but through the groups providing them passage across a nightmarish Indianapolis. While the Liberty Tree boys want a “Government small enough to fit in a toilet, where it could be properly flushed,” the Free Women Collective, who adopt Hannah, fight for an egalitarian future. Then there’s the humanitarian urgency espoused by Gabrielle Justine, a Canadian UNICEF worker who drops into hell to ensure that aid packages go where needed (not the black market) and no faction employs child soldiers. Her superiors say to trust in the United Nation’s glacial system because, “If you take on the war’s problems as your own, it will grind you down.” But Gabrielle knows from personal experience—after a man risked his life to save hers as a child—that wartime heroics, no matter how small, can bring immeasurable good.

The last important player is Aubrey Fox, reporter for the Indy Chronicle. As Molotov cocktails and sniper bullets fly, she wonders, “Did bearing witness to the horror actually help in any way, or was she really just helping herself?” DiLouie’s character work generally impresses, but through Aubrey, who happens to be African American, he’s able to drill straight for the nation’s rotting core. In an editorial that her editor refuses to print, she says, “In the past decade, environmental depletion and income inequality created scarcity and hardship … Instead of solving these problems, we retreated into tribalism … Marsh’s election was a symptom, not the disease.”

Our War does reveal flashes of what’s to come if Nazism grows any more potent, and if Antifa rises to meet them. And despite the violence being fictional, the author’s prowess in deploying it forces a hush between sentences, as if real blood has spilled. One character, Sergeant Shook, embodies the feral complexity that might otherwise bring us to read Stephen King. The difference here is that when Shook snorts coke and threatens to rape someone, DiLouie’s expertly-crafted context reminds us that such people surely exist on battlefields around the globe.

Conspicuously absent is the United States military, as well as other professional forces from allies like England and Germany. DiLouie aims for realism, yes, but kick down too many logistical dominoes and this novel would be about not just American politics, but World War III. The plot wisely focuses on a handful of people representative of the major factions arrayed against each other. As they weave together more and more tightly, Our War’s climax occurs in jagged flashes that do not glamorize violence. DiLouie instead captures the horrible way in which it feels both inevitable and avoidable. This makes for a whirlpool of a read, no matter how you interpret the U.S. Constitution’s 2nd Amendment.

DiLouie’s use of Hannah Miller on the cover and as a protagonist is a bleak reminder: children absorb all they know from adults. When we kick down doors, they copy, as if it’s fun. But if we extend a hand across the aisle and work with our ideological counterparts, we show that the future matters. That innocence is something to prize, not trample.