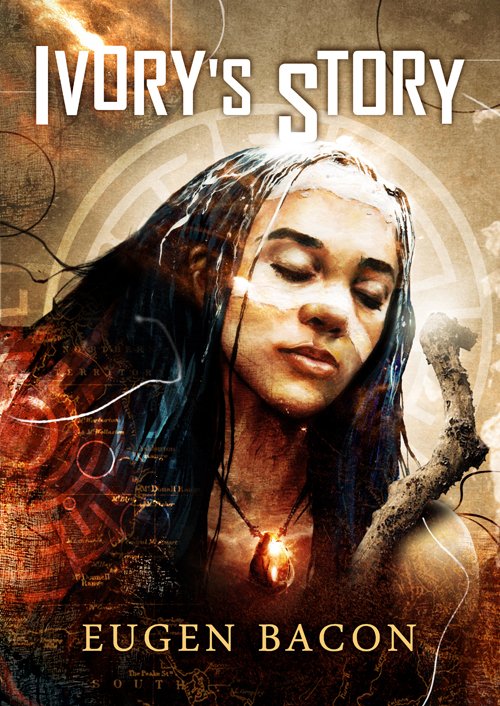 Mention dreaming or places of dreams, and many fantasy fans will think of the setting for Neil Gaiman’s comic book series The Sandman. In it, avatars like Death and Delirium populate a realm where humanity’s imagination bumps against all that’s eternal. The titular character evokes our shared hopes and fears in lines like, “What power would Hell have if those here imprisoned were not able to dream of Heaven? Lofty, sure. But Gaiman’s treatment of the concept is nevertheless a pop culture varnish.

Eugen Bacon, the African Australian author of Claiming T-Mo (2019), explores the Dreaming’s sacred roots in her latest novel, Ivory’s Story. The narrative opens in the Outback, near Darwin. An astrophysicist breaks from her work to enjoy the sublime rock carvings of animals in the Gorge precinct. Under fulsome stars, the scientist examines a “mosaic of legend, tradition and religion carved on rock, a limitless interdependence of spirit and land,” created by indigenous people. Then a shooting star cuts through the sky. When the scientist can’t find any evidence that a meteorite landed, she decides, “It was nothing more than a stupid star.”

Bacon next introduces Izett, a young orphan at St. Vincent’s, in Sydney. She wears an amulet, given by her mother, that burns anyone who tries to steal it. Though she makes friends, like the sickly Emma, Izett learns from uncouth foster families not to trust easily. In adolescence, she prefers the name Ivory. After a lousy night in a dive bar, she meets Professor Bahati Moody, whom she finds decent and trustworthy, so much so that, “She clung to the warmth of his lips, to his tenderness, and then to the current that flowed from his lips to electrify her whole body and float her mind.”

Bacon deftly cuts from this blissful moment to establish readers in the Valley of Dreams, indigenous village and launchpad for the surreal horrors in Ivory’s Story. Here, a man named Muntu, “tall as a pine” and “dark as night,” has made the grave mistake of loving Dotto, a twin and the carrier of ill luck. She’s also the daughter of “the shifty Chief Mezzanine,” who decides to scare Muntu for his transgression. The Chief ends up burning the innocent Muntu alive. This causes the land itself to seek vengeance on the tribe. Plants wither and game animals vanish. Ultimately, the Valley of Dreams uproots itself from the Earth and sails into the depths of space, remaining home to a small population.

Initially, Bacon uses the space-born Valley of Dreams to pump joyous psychedelia into Ivory’s Story. It’s a place where, “Sound became tri-colour and flooded, rainbow as a Lorikeet.” Even the people develop “ivory eyes and purple hair to withstand the climate.” We meet Mama Pebble and her rambunctious twin boys, Ku and Doh, who live the kind of idealised, free-range childhood that was denied to Ivory (Asgard, from The Mighty Thor, comes to mind, along with a wish to see Bacon’s epic illustrated). But not all is well in the Valley. Remember the shooting star from the opening? This is actually a “confused demon” that’s released from the Valley and now “seeks a twin.”

Back in Sydney, someone—or something—is murdering lovers during sex, creating foul crime scenes that defy logic. We meet Detective Inspector Ivory Tembo, and the narrative has returned to the present after numerous foundational vignettes. As Operation Limelight fails to catch the killer, Ivory recruits a seer from the Orange Country named Ginny Mo’unga. She explains that this otherworldly creature finds lustful men to feed a hunger, then becomes trapped in their bodies with no clear way out except with murder. To encounter this material deep in the story may jar some readers; others will likely turn the pages faster. Bacon paints one particularly hellish night, as Ivory

looked around the room wrapped in semi-darkness, lit only by the faint orange glow from an array of ten small candles. More chains, hooks, whips and a hanging rope—noose and all. A pilot cap sat askew on the victim’s shoulder. His glitter costume was unevenly torn, the red on its lining different from the spray of crimson around the walls. The width and depth of the blood stains shouted the energy of violence that had occurred in the room.

In mythology, there are spirits or swamp beasts on par with the Loch Ness Monster and other cryptids. Like a mascot of the place of dreams, the spirit has no single shape or context. Ivory’s Story uses the creature’s elastic lore to plumb the dark corners of urban fantasy, where sex and violence collide. And yet, Bacon hasn’t quite written a supernatural procedural. The first third of the novel is episodic, teasing readers with the narrative’s true direction. Being a detective puts Ivory close to the action, but Ginny’s oracular presence delivers more to the plot than the protagonist’s legwork. The seer also asks, “The education they gave you, does it make you white?” Ivory still possesses her mother’s amulet, and it acts as a lodestone, drawing her through the grim and the fantastic toward the answer to Ginny’s question.

Transformation and identity are the themes connecting chapters that dance and shift in each other’s light. The book’s final third revels in imaginative potential, where Bacon shows us sumptuous glens and hidden courts. She also reminds that nature and time live within us, and are capable of healing anything.