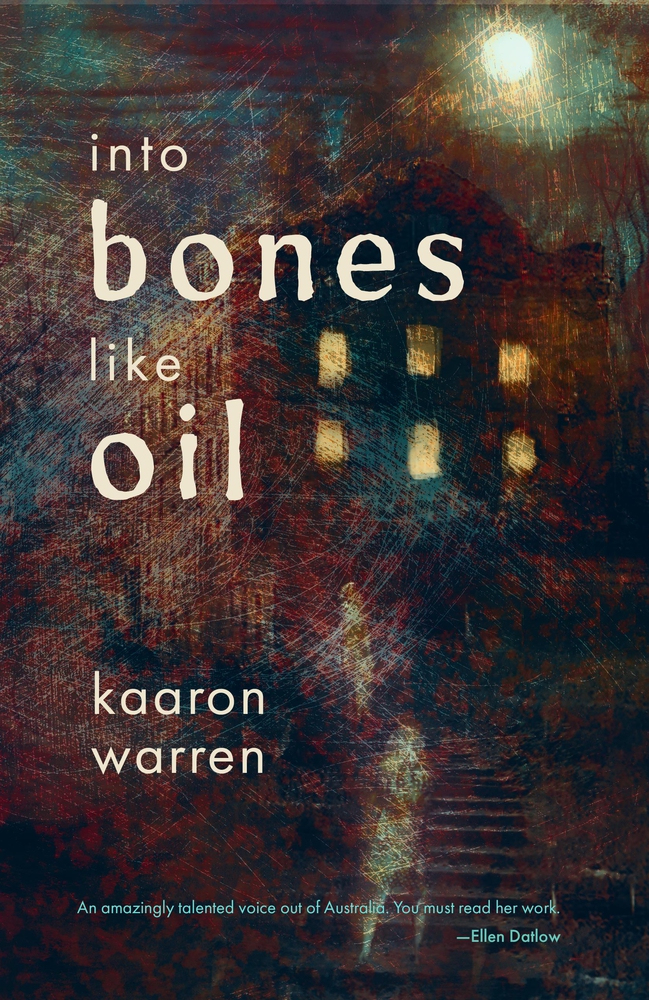 Any fan of Lovecraft or the American gothic genre will admit the importance of the sea in horror literature. The oceans are ever-changing, mysterious even; and they hide their secrets beneath a barely-penetrated surface. An old seaside cottage, or village, or a lonely lighthouse evokes a wonderful sense of the eerie, the desolate, and the abandoned. In Into Bones Like Oil, Kaaron Warren has played with these stereotypes by moving the events of the novel into a contemporary Australian suburban setting, although this is not immediately apparent.

The story begins with the protagonist Dora checking into a low-rent hotel/rooming house late one night. From the outset, Dora is an enigma. Why is she here? What would drive her to live in squalor? A few early memories of her daughters set the tone, as does the strangeness of the house which, after some calamity, has sunk and, the reader is told, is now facing the other way around. Dora’s room is on the ground floor, now the lower ground level, where the front parlour used to be.

The next day Dora meets a few of the other residents, including the landlord. The tumbledown nature of the rooming house goes hand-in-hand with the low social and economic status of its inhabitants. Those Dora interacts with are generally accepting of her, if not very cheerful, and it becomes apparent the house is a last resort for the cast-offs of society. Dora does not seem the cast-off type. The seaside setting, though, gives the reader hints of abandonment and isolation, reinforcing the idea that the inhabitants of the house are a sort of human flotsam or jetsam. Sadly, this message remains in the background and never develops into a proper theme, staying only a few turns of phrase away from an Australian gothic.

As Dora gets to know the landlord Roy, a minor ghost-writer of horror novels in his youth, it becomes apparent that Roy’s obsession with a local shipwreck has taken a sinister turn. With the help of the inhabitants of the house, Roy hopes to talk to the ghosts who haunt the wreck. The other guests in the house are uneasy about this but generally require little coercion, seemingly up for it to stave off boredom or to bring meaning to their lives.

Roy, however, has darker motives. As the days pass and Dora is drawn into his web it becomes clear she has motives of her own.

Into Bones Like Oil is a short novel, but is as long as it needs to be. Where another author might have been tempted to give a lot more background for Dora, the house, Roy, and other guests, Warren drip-feeds the reader an elegant sufficiency. This is enough to keep them informed and leaves enough for the eventual denouement of Dora’s motives, but it results in a few one-dimensional characters. Also, the slow release of Dora’s backstory builds suspense but comes at the expense of not really ever feeling we know her. She is the protagonist but she is also an enigma, remaining a stranger to the reader throughout the story in order to hide her secrets, so empathising with her is hard.

The task of empathising is made more difficult by the lack of a proper setting. For several chapters the place and time of the story are not apparent, and certain elements such as the sunken, backwards house, may lead the reader in the wrong direction. After a number of scenes the reader is finally shown that the story is set in the modern day through Dora’s visits to the supermarket. The characters’ Australian slang gives an eventual sense of place. But it is not until the end of the book we learn the house is in a seaside suburb, not a creepy little town up the coast or any other stereotypical location. It’s true this is not vital for the story, but the reader may be jarred out of the flow when the truth is finally revealed, and they realise that, due to their own literary prejudices/expectations, they have been picturing it all wrong.

This aside the author does a good job of maintaining a spooky feel throughout the story, and the journey of Dora, surprising though it turns out to be, is utterly engaging. Readers will be drawn in by the enigma presented by Dora but may ultimately feel alienated by the lack of early grounding.