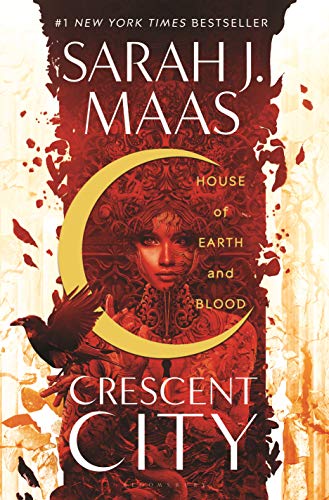 House of Earth and Blood

House of Earth and Blood

“His eyes flickered. Whatever the fuck that meant.”

That is a real quote from this book that Sarah J Maas actually wrote. Frankly, I’m inclined to agree. I haven’t the faintest inkling what it means for someone’s eyes to flicker, either. Though, I’ll admit I wasn’t quite expecting the book to call itself out like that. But let’s not get ahead of ourselves…

The story of the House of Earth and Blood takes place in a modern-esque world wherein thousands of years ago, fey, angels, werewolves, witches and all manner of other fantasy creatures crossed through a rift in time and space and settled down to live in our world. It’s Sarah J Maas’ take on the question of what the world might look like if fantasy creatures and races (in this case, collectively referred to as the Vanir) were commonplace. We follow Bryce Quinlan—a half-human, half-fey, young woman—as she investigates a series of horrific murders following a tragic event that changed her life two years earlier.

There are a plethora of takes on this concept, and each tends to tackle it with varying degrees of faithfulness to the real world. The worldbuilding in the House of Earth and Blood focuses primarily on its central location—Crescent City—which is presented as a microcosm of the broader politics and social dynamics of the society it occupies.

Maas doesn’t present the setting as ‘our world but with magic’, but rather uses elements of real life in order capture the fusion of technology and magic in a way that feels modern, but also gives a nod to the myths and fables of the real world. There are elements of Norse mythology that shine through in the religion and language, and real political problems—like slavery and racism—that permeate aspects of the city and its culture. As such, the divide between the familiar and the uncanny is blurred, and there’s an organic feel to the setting.

At the same time, however, some of the details of the social structures feel a little too cliché. For instance, the world ranks the different magical races from ‘most awesome based on their likelihood to win an epic battle’, to ‘Why are there even humans in this story?’. Angels and fey occupy a spot at the top, with us lowly muggles sitting firmly at the bottom. (Thus, character conflict for our protagonist, as she’s part mere mortal, part immortal fey—oh, the turmoil.) I wanted there to be more depth to these elements, yet at times they were used to deliver some of the most interesting elements of the setting. But, overall, they always felt a little too superficial to fully invest in.

Throughout the novel we’re introduced to the four houses of Crescent City: The House of Earth and Blood, The House of Flame and Shadow, The House of Sky and Breath, and The House of Many Waters (we’re not going to talk about how that last one doesn’t follow the naming conventions of the others, but it bothers me too). The intrigue around the houses is built up slowly and to varying degrees of effect. On the one hand, there’s a tempting sense of mystery that keeps the reader wanting to know more about them, but on the other, each of the characters belongs to a house and it’s understood that everyone in the story knows what the houses are and how they work. And yet, very little effort is given to explaining them to the reader—especially early on. Hundreds of pages pass with little-to-no explanation, and we’re left with only a vague sense of one of the book’s core world building elements, which I personally found distracting.

House of Earth and Blood has been coined as Maas’ first foray into adult fantasy, but the writing style, characters, and relationships feel much like her other, young adult and new adult, works. There’s an immaturity to the composition and all its elements—especially the character dynamics—that doesn’t quite work for the target audience. And truth be told, I think that if this book had been marketed towards new adult readers then it would have better set up my expectations to enjoy it. To clarify, there’s nothing wrong with young adult and new adult stories—I love and read both—it’s just that in the case of House of Earth and Blood, the story doesn’t deliver what the marketing promises. There’s gore and violence and swearing (lots and lots of swearing), but I can generally get those from young and new adult fiction. They’re not defining elements of the adult demographic’s literary tastes.

The writing itself also falters in ways that should have not been allowed past the editing stage (the aforementioned quote being one of them). There are numerous points throughout the book where the writing just gets sloppy, or when Maas does… well, this…

You know—you males who rip your shirt off at the slightest provocation, who know how to kill people in twenty different ways, who have females falling over themselves to be with you […] Your favourite hobbies are brooding, fighting, and roaring; you’ve perfected about thirty different types of snarls and growls; you’ve got a cabal of hot friends, and the moment one of you mates, the others fall like dominoes, too.

Now, if you’re familiar with Sarah J Maas’ work, you may not be surprised to read the above If you’re not familiar with her work, then it’s worth noting that a passage like this shows a level of self-awareness for her character tropes that is, frankly, disconcerting (also, please excuse the use of the words male, female and mate. It’s kind of her thing at this point and we do not have the word count to get into it).

At this point you’d be forgiven for thinking that my condemnation of the book was some sort of indication that I didn’t enjoy it, and that I won’t be picking up any more of Maas’ works in the future. You would be mistaken.

For all of this book’s flaws and my deep-seated frustrations with the writing and characters, it’s got to be said: I’ll probably read the next one. Because, at the end of the day, Maas’ writing isn’t supposed to be literary. It’s not supposed to be high brow or revolutionary. It’s supposed to be fun. Pure, indulgent, weirdly self-aware fun. And Maas knows it. It’s why she made fun of herself and her ridiculous character clichés, and why she has a dedicated core fanbase who loves her. If you’ve read Maas’ work before and you liked it, you’ll probably like this. If you haven’t and this sounds like the kind of wish-fulfillment filled fantasy that you’re into, then definitely pick it up. Just, don’t take it too seriously. After all, Maas doesn’t.