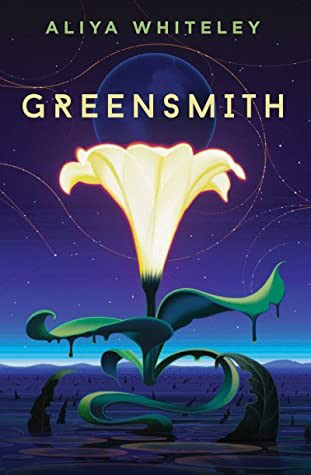 Aliya Whiteley’s science fiction novel, Greensmith, has a bizarre intergalactic travel plot similar to a Doctor Who episode, but leaves the reader a little cheated out of the main action.

Penelope Greensmith, a lonely, middle-aged divorcee, spends her days caring for and expanding the Collection, a seed bank of all the plants on Earth. She tediously categorises each plant by adjective—never repeating a word—and enters them into the Vice, a unique device left to her by her father that compresses and saves the seeds in a small disc.

When a mysterious plague begins to attack all the flora on Earth, causing it to dissolve into a poisonous green goo, the Horticulturalist (Hort), a handsome, enigmatic space traveller, visits Penelope to tell her that the plague is sweeping through the galaxy and the Collection that she has been carefully curating may be the only thing that can save the universe. Both characters, being lonely and in desperate need of company, form a fast bond to each other. Hort tells Pea he “ha[s] a method for travelling with a companion. For keeping a personality as intact as possible while moving through the universe, at speed, vast distances.” Pea’s emotions would more or less disappear, and she’d no longer be human, but Hort promises her early on that, “We go travelling, we get our answers, and we save the universe. Maybe even Earth, too, if we’re quick enough.” Pea realises a little too late that Hort is not all that he seems (and that this promise, to Pea and the reader, will fall flat), but his charms are too much to resist.

Hort transforms Pea, his “pot plant” companion, to a compressed or “reduced” state not fully human, much in the same way Penelope’s plants are compressed in the Vice. The parallelism between the state of reduction in the seeds and the characters creates a good sense of congruity throughout the novel, but is slightly overdone where the action and plot could be more fully explored. In order to understand her alien surroundings in this new compressed state, Penelope’s brain fills in what she sees with seemingly random known objects, like transforming the aliens of planet Tearthumb into flamingos or the Rampion into Morgan Freeman, or bounces around adjectives and synonyms for terms that don’t quite translate into English. Among this confusion, language becomes her most valuable and destructive asset.

However, every time that Pea has trouble understanding or computing what she witnesses or hears, there are literal blank spaces in the text and she “ruptures.” Many major plot points are glazed over in these moments where Pea, along with the reader, are trying to piece everything together. Hort has the ability to transfer information to Pea in a quick burst, which includes a snapshot of all the important information she missed while reforming herself, but is also used when entering a different planet or interacting with an alien species. These large chunks of exposition detract from the plot by summarizing too much and not allowing the reader to deduce—or experience—anything themselves.

Pea’s daughter, Lily—named after the flower Lilium longiflorum, a fact that Whiteley doesn’t let her readers forget—is left on the apocalyptic Earth with her father as Penelope traverses space and time. After her mother disappears, Lily sends radio messages into the void, unsure whether her mother, or anyone else on Earth can hear her. Penelope clings to the complicated relationship she had with her daughter, even though she isn’t supposed to experience strong emotions. After learning that the Earth she knew has long since died, Penelope engages more creatively in her role as a mother and takes the seed of the Rampion along with her as she travels with Hort looking for the cure to the plague.

One redeeming quality about Whiteley’s novel was the time spent parsing out language and looking at the relationship between words and the ability to express yourself. As Whiteley writes, “A creature that does not express itself is not engaged in the act of refining itself. It’s the act of translation that makes thought blossom from unformed possibility to knowledge.” Pea’s dedication and care to language and plants are what ultimately save her.