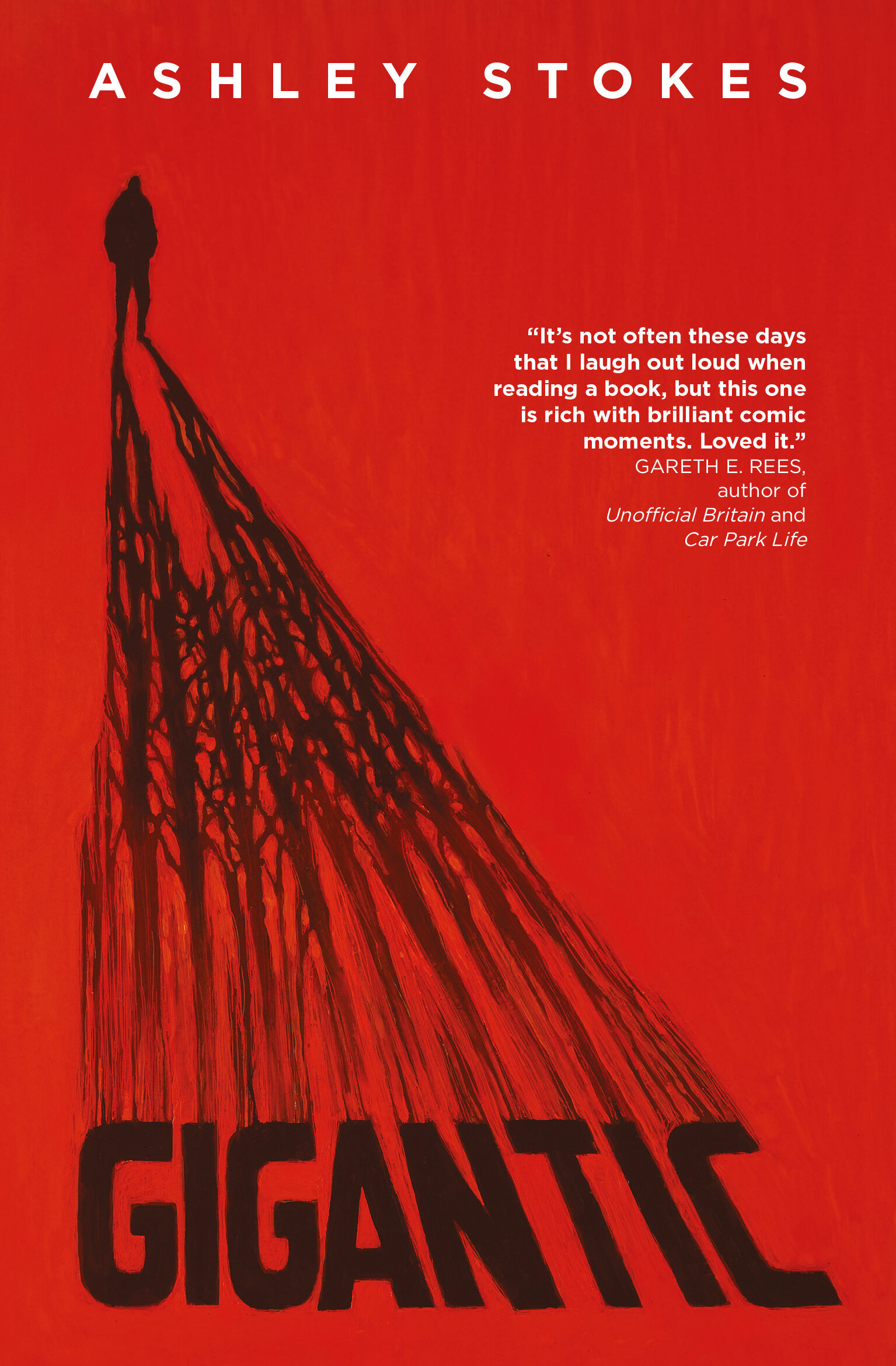 Seeing patterns is a human superpower. It helped our prehistoric ancestors outsmart giant cats in the wild, and propelled explorers around the globe via the stars. Even when data from the environment isn’t physically sustaining us, we use knowledge to shape stories, histories, and religions that guide the species.

Sometimes, however, we become ensnared by the landscapes of the mind. We create stories that do more harm than good. Is that Jesus burned into my toast? Are there tracking devices in vaccines? These two examples sit at opposite ends of a spectrum of dangerous ideas. Midway between let’s place a dogged belief in the Long Man, or formally known as: Sasquatch. Ashely Stokes, author of Voice (2019), tries to flush this rare specimen out from his latest novel, Gigantic.

Kevin Stubbs lives in the London Borough of Sutton. His life is the drab, office-bound existence of an IT worker. His wife, Bohuslava (Boho), is from the Ukraine. Together they have an adolescent son, Kyrylo, who for the average couple should provide plenty of warmth and adventure. Unfortunately, Kevin isn’t average. He grew up as a fatherless Jehovah’s Witness, with a mother who imposed a colourless childhood devoid of culture, nuance, and creative development. And yet, at a friend’s house while growing up, he saw Arthur C. Clarke’s Mysterious World on TV dissecting footage of a Sasquatch. This footage, the local Gartree/Hogg film of 1988, is comparable to the famous Patterson/Gimlin clip from 1967, and it shot a rainbow of possibility through Kevin’s world.

He became a Knower, someone sure that Gigantopithecus exists. Now he and a small team called the Gigantopithecus Intelligence Team (GIT) hunt for the creature in and around Sutton. Tragically, Kevin’s wife has forced him to choose between his family and his obsession. Young Kyrylo is bullied at school thanks to his father’s reputation as a nut, and Boho finds skulking in the woods at night foolish.

Though Kevin promised to abandon “squatching” with the birth of his son, he can’t. He desperately wants Kyrylo to have the childhood steeped in wonder that was denied him. Boho, however, won’t let Kevin near the boy, so life revolves around his GIT partners. They are Derek Funnel, an occultist who believes in things far stranger than the shaggy Long Man; and Maxine Cash, a science teacher who aims to corral their investigations with logic. When an ape-like creature with glowing red eyes is filmed on Banstead Common, the trio steps in.

Stokes presents the narrative as field reports by both Kevin and Maxine (or Sci-Borg, as she’s known behind her back), with Kevin offering more personal insights. The prose is littered with golden scat for pop culture fanatics, like the line, “It’s in the trees, it’s coming,” which is from the film Night of the Demon (1957), and later sampled by singer Kate Bush for the Hounds of Love (1985) title track. Kevin as a storyteller is charmingly manic:

you’re not supposed to see it. It’s not supposed to exist. It can scare the bollocks off you. Just look what happened to Jackie Hogg, one of the Original Knowers. In the early days of GIT, pre the arrival on the scene of the young Kevin Stubbs, Jackie has seen Giganto so often that his nerves [unravelled]. It was like he’d been playing a horror-based role-playing game where the characters have a sanity score… Every time he’d seen Giganto, he’d rolled a twenty-sided die and whatever number came up had been deducted from his mind. I’m not like that. I am solid.

“Solid” though he may be, Kevin is transparently starving for international fame. He wants to prove Gigantopithecus exists to the world, upstage the scientific community, and regain his family’s respect—in that order. When Maxine explains that she and Boho have shared frank conversations about Kevin being a wonderful father and husband—minus the squatch hunting—he ignores her. This places a sour tinge on the novel’s wacky tone that Maxine acknowledges as “tragic.”

The fallout from the Banstead Common investigation hits Kevin hard. He’s given reason to reassess the origin of his obsession and the secret he’s kept from Boho all these years. After Maxine reminds Kevin of the hard facts, including that Gigantopithecus would require a base breeding population of several thousand individuals for genetic diversity, she takes the ultimate pity on him. She invites him on a proper scientific expedition.

Kevin has a big heart, but a skewed sense of what makes life interesting. This volume ends with a protagonist who is entertaining company, but still has no respect for things like reproducible evidence or testable hypotheses. Stokes sets up an intriguing sequel, primed for a grander canvas. The answer to whether Kevin will grow as a character, or stagnate as a caricature, awaits us through the pines, just beneath that shadowy overhang…