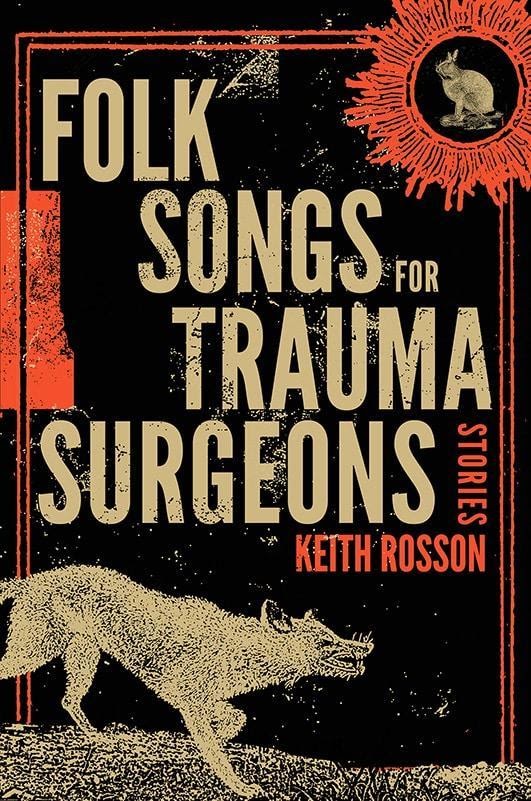 Thanks to the Metallica documentary Some Kind of Monster and Anthony Kiedis’ autobiography Scar Tissue, I arrived at a sudden insight back in 2004: drama is intrinsic to certain situations. The music world—with its huge egos, creative temperaments, friction between artists and businessmen, and tacitly condoned drug abuse—is a veritable agar plate for drama.

The social lives of the poor and working-class are often similarly afflicted. Bad circumstances lead to regrettable decisions, which in turn bring about even worse circumstances. Drama to the third power. This downward spiral provides grist for many of the remarkable stories in Keith Rosson’s Folk Songs For Trauma Surgeons.

The darkest example is “Their Souls Climb The Room,” where an ex-con and reformed meth addict gets a job in a slaughterhouse only to have a series of events drag him back down again. In “Coyotes,” a young man’s parents are killed in an automobile accident while en route to bail him out of jail, leaving him and his brain-injured brother to eke out an existence in rural Texas. And “Winter, Spring, Whatever Happens After That” chronicles a family’s agonising disintegration after the mother suffers a nervous breakdown and walks out.

When Rosson’s not unpacking the minutiae of the underclasses, he turns his attention to the colourless absurdity of the corporate world. “The Lesser Horsemen” portrays War, Famine and Pestilence as white collar workers facing redundancy while the Good Lord indulges office politics and plays favourites. In “Yes, We Are Duly Concerned With Calamitous Events,” staff at a novelty items manufacturer find themselves trapped inside their office while outside the world goes on as if they never existed.

The latter story also demonstrates  Rosson’s  employment of the fantastic and supernatural—usually in sparing fashion, like gold filament woven into a dress. Another is “At This Table,” where a restless spirit intervenes as a commitment-phobic woman commences yet another break up. The Tooth Fairy is the protagonist in  “Baby Jill,” a disturbing rumination on humanity’s reluctance to question the status quo, no matter how depraved that status quo might be.

Then there are occasional excursions away from the collection’s recurring themes. In “Hospitality,” a Tarantino-esque story that employs a shifting perspective narrative, three troubled strangers are drawn together via the common thread of a Wisconsin water park. “Dunsmuir” offers a breath of hopeful air amid the misery, as love struggles to triumph in adverse circumstances. And in “This World Or The Next,” a woman who has devoted 18 months of her life to a revivalist religious group finds her belief in its 26-year-old preacher waning as his flock dwindles.

Folk Songs For Trauma Surgeons is literature of an increasingly scarce variety in the narcissistic and hyper-political 2020s: literature without pretension. Rather than posturing and craving intellectual validation, Rosson is content to stay behind the authorial curtain and let his stories and characters do the talking. His prose is fearless and masculine, yet elegant and often beautiful, even when conveying the most repugnant scenes. Take this line from “Their Souls Climb the Room”:

The next hog came down the line, forelegs twitching all dreamy amid the cataclysmic roar of the place, the reek of offal, the animal’s dark and bottomless eye, and Nolan stuck it quick in the throat, loosing a fire-engine red torrent that jetted against his apron and splashed against his boots, and then pulsed into the trough set into the floor as it moved on down the line.

It’s not gore for gore’s sake but gore for honesty’s sake: This is the brutal reality of Nolan’s post-prison life. Rosson doesn’t intend to truckle to spare some fainting-couch reader’s finer sensibilities. Nearly every story has a similar grounded, no-nonsense feel—the literary equivalent of steel-capped boots.

There is a lot to be said for “write what you know.” It’s clear Rosson isn’t some cloistered academic or inner-city snob deigning to create mangled and condescending interpretations of the working class; this is an author who knows his characters as intimately as family. “I understood he had lived a life before landing in the chair before me,” narrator Dave says about his addiction counsellor in “Dunsmuir,” and, if that isn’t also true of Keith Rosson, he is damned good at imitating someone who has. His characters exude the same effortless authenticity that was the secret ingredient to Stephen King’s early success.

If Folk Songs For Trauma Surgeons has a flaw, it’s that the characters and situations have a certain sameness after a while… and story quality does flag when Rosson tries his hand at more middle-class concerns. “The Melody of the Thing,” for example, imagines a musician’s life after a meth-head stomps his hands to a pulp… and culminates in a scene so whimsical it is almost callow.

Yet, even in his weakest moments, Rosson’s plain-spoken style, innovative use of language, well-oiled character development, and interesting story elements result in addictive entertainment and pleasing thematic weight. He’s an author with bestseller potential.