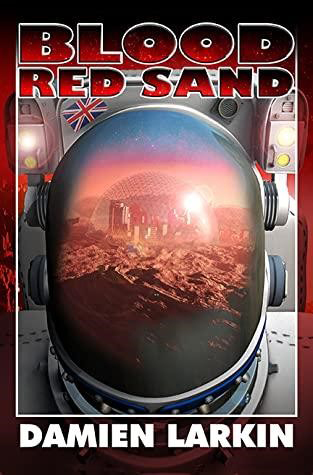 Damien Larkin may be familiar to readers of this magazine thanks to his novel Big Red, which was released in 2019 and reviewed here. The first instalment introduced us to an alternate Mars colonised by the Nazis and subsequently conquered by the Allies, to which the digitised consciousnesses of unwitting military recruits from the present day were sent (while also travelling back to the 1970s) and placed in lab-grown bodies to fight Martians. Confused? Fair enough. The book explained it far better and ended satisfactorily, although with a great deal of unfinished business to which Larkin returns in Blood Red Sand.

Initially the book seems to have few links with its predecessor, as we follow the fortunes of several familiar faces (a much younger Sergeant McCabe and Private Jenkins) as they battle the Nazis for control of Mars in the 1950s. For a while, the book seems like an excuse for a series of military set pieces, with little to no character growth. Over time, however, we see Sergeant McCabe and Private Jenkins confront the reality of serving alongside the Russian and West German soldiers with them in the frontline, accepting them as compatriots in a dangerous and deadly struggle that none of them expected to be in. Humanity shines through in Larkin’s writing and we begin to see the characters as people, not as the chess pieces on a board that some military fiction portrays.

There are several subplots—mainly on the German side—each of which serve to fill in the background of the first novel. We see the experiments that result in the technology allowing the transfer of consciousness, and we learn more about how the odd German command structure in the first book came to be. Most important is the gradual introduction of the heroes from the first instalment who, at the end of that book had travelled back in time to aid the allies, which is what we all came to see. Larkin does this wonderfully, and should be praised for his restraint. Tempting as it must have been to introduce the heroes of Big Red earlier and make them the focus of the book, Larkin instead lets this book focus on Sergeant McCabe and Private Jenkins. The battle for Mars being shown through the eyes of two young, terrified, and headstrong men gives them an immediacy that the experience of an older soldier such as Big Mo, Dub, or Smack could not. The original heroes have their own agenda. Larkin lets us see them attempt to enact their plans without giving us their internal dialogue, which works wonderfully well.

After a scene-setting introduction in the Oval Office of the Truman White House, the book is one long battle on Mars. The action does not let up and the reader is swept along on a wave of action that does not stop. We start as Sergeant McCabe wakes from suspended animation in orbit around the red planet, then follow all our protagonists during an extremely bloody and meticulous battle over the Martian sands and into the domed city of New Berlin itself. Larkin has his military prose down pat and never gives the reader a chance to catch their breath as the action rushes from one firefight to the next. He uses the cauldron of battle to explore the characters’ fears, hopes, and humanity, such that we come out the other end having seen the best and the worst of them.

The ending, while pre-ordained as we saw the future in the first book, clearly sets up a third. If it’s anything like the first and second, it can’t arrive soon enough.