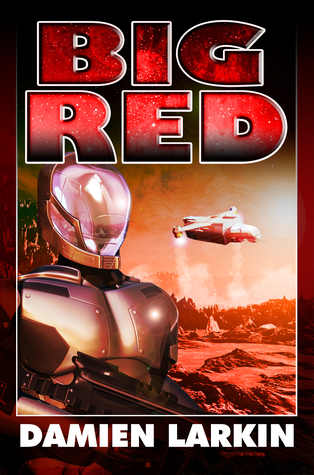 Where would military fiction be without the colour red? Over the years we’ve had The Thin Red Line and The Big Red One. In 2019 we have Big Red, the debut novel from Irish author Damien Larkin. A former weapons specialist in the Irish Reserve Defence Forces, Larkin has presented us with a book that combines science fiction with a hefty dose of military realism. The comparisons with Heinlein’s Starship Troopers are obvious but superficial, as the story owes much more to Joe Haldeman’s The Forever War. Where Heinlein presented us with a very gung-ho shoot-em-up, Larkin shows the reader life in the forces as it really is—tense, hard, and grim, but with a vitality that holds the reader’s interest.

He does this by following Darren, an ex-Irish Reserve Defence Force soldier who is talked into a short-term security contract by an old buddy. Unfortunately Darren (and everyone else) fails to read the contract, which states that his consciousness will be removed from his body in 2018 and transferred to a cloned body on Mars. Confused? So was he.

This Mars though is one where the Germans fled after World War Two, one the Americans and British captured from the Germans in 1954 and now occupy. An unfortunate complication to the occupation is the insectoid/arachnid invaders from another world whom Darren and his mates have been brought over to fight. After a few months of virtual reality training and psychological conditioning, the fight begins. During their time on Mars they hear rumours of a German leader still alive, and they see the all-powerful MARSCORP on the hunt for ancient red planet artefacts. All too soon, however, Darren and his squaddies realise they’ve been duped. Originally told they were signing up for a one-year tour, they find the reality a great deal starker—there’s no going back. The consciousness transfer was a one-way trip. For Darren, the realisation that he will never see his wife and baby girl again overcomes his sense of duty, and dreams of rebellion slowly become reality once he discovers that the year is no longer 2018, it’s 1975. To make matters worse the aliens are not what they seem.

The book’s strength lies in Larkin’s ability to weave these threads together while letting the reader discover the reality in small doses. We learn about the Reich, the date, and Darren’s predicament as it happens to him. The first-person narrative ensures we see things unfold only through his eyes, from a man at the bottom, not at the top. But what is a strength can also be a weakness. In showing us life through the eyes of a grunt there are things we never learn. How did the Earth master space travel? And cloning so quick that it can grow a body (complete with scars and tattoos) in the afternoon it took Darren to fill out his paperwork and undergo a physical? These elements are never explained. Darren gets quite a shock to realise he is on Mars, and an ex-Nazi Mars to boot, but we never learn whether the colonisation of the solar system is common knowledge back on Darren’s Earth. Likewise, why his consciousness (and body pattern) was sent to 1975 is never explored, as Darren, more interested in getting out of his predicament than dwelling on how he got there, simply accepts it and moves on. While this drives the plot, Darren’s lack of curiosity can leave the reader feeling like they’ve missed a great deal. Darren himself, while sympathetic early on, becomes more distant as time stretches over the thirty-five years the book covers. Darren’s main driving force in the first half of the book is to return to his wife and daughter, but this motive dissipates as his separation from them wears on. And with it goes a measure of his humanity.

It is the action, however, that drives the story, imbuing it with a reality and a depth that the narrative might otherwise lack. Larkin’s combat scenes are tense and exiting, with Darren’s first-person narration ensuring that we know what’s going on only as he discovers it. They seem real, or as real as combat on Mars in the past/future can be, and the reader never gets the feeling that they’re watching from afar. Darren is knee-deep in the action, jumping from incident to firefight with his trusty HK-17 Hybrid Assault Rifle, which fires both bullets and particle beams. He and his squaddies have bad guys to kill, in differing forms. Throughout the book, their grit matures with vigour, reluctance, determination, and resignation, coinciding with Darren’s personal growth. That keeps the story what it is—Darren’s story, and a very human one at that.