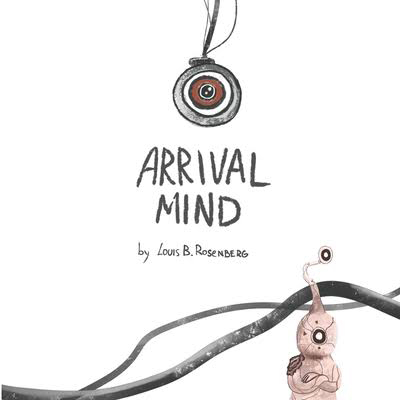 Arrival Mind, a dark picture book for an adult audience, explores the potential dangers we face with the upcoming age of Artificial Intelligence (AI). Author Louis B Rosenberg developed the first functional Augmented Reality system in the early 1990s, and has been awarded hundreds of patents for technologies including AI and Virtual Reality. He is now the chief scientist of Unanimous AI, a company which aims to use Artificial Intelligence to “amplify human intelligence rather than replace it.” His other fiction includes the graphic novels Monkey Room and Upgrade.

Rosenberg’s main illustrated text comes in at just over two hundred words, plus end notes. As with all true picture books, however, what’s important isn’t the number of words, but what the author does with them. Rosenberg presents his argument in engaging terms, with deceptively simple rhythm and rhyme that stick in the reader’s mind like a song.

Picture books for adults often rely on humour or parody, boosted out of the range of a child audience by virtue of horror (Zombie McCrombie, Michael Ward) or profanity (Go the F**k to Sleep, Adam Mansbach). This book is a bit different. It’s a thesis in a miniature format, focusing on a philosophical question too grim for young children, while challenging his intended audience for a reply.

The central analogy Rosenberg uses to show his audience the danger of being complacent about AI is that of an alien mind arriving on earth:

If an alien species was going to arrive imminently and become intimately involved in every aspect of our lives, Rosenberg suggests we would want to be aware and prepared well in advance.

This analogy gives rich ground for illustrator Anastasia Khmelevska to play. The alien she illustrates looks far more relatable than the AI system, with its tentacle-like cords and gripping missiles. Its arms are crossed; this alien is evidently annoyed that a new intelligence has already taken over the earth, stealing its thunder. Khmelevska’s illustrations interplay with the text adroitly, bringing Rosenberg’s words to life and adding a level of their own. Graphs, slogans, and symbols litter the early pages, as the AI bedazzles the world—contrasting starkly with the bleak, inky images she provides as humans try and fail to pull the plug on their creation.

Several hundred words of “closing thoughts” allow Rosenberg the space to discuss in prose some of the ideas brought forward in his fiction. While he keeps things simple enough to be clear to any reader, at this point he shows his expertise in the field of AI, his sense of what we are creating, and how much control we are likely to have over it. For instance, he makes the point that “Artificial minds are not made by writing software with carefully crafted rules.” Instead, as they are created, they will make “millions upon millions of tiny changes to their own structure until an intelligence emerges.”

His point isn’t that we could stop the emergence of AI, or would even really want to. It’s that we need to prepare for its impending arrival, and to avoid absolute dependency on an alien mind that will never “think like us, or feel like us, or be like us.”

Rosenberg’s book ends with a call for vigilance and action, including a list of non-profit organisations that are “Working to Protect Humanity from the Dangers of AI.”

This is an attractive book on several levels—it looks good, smells good, and feels good. It belongs on coffee tables, to lure visitors to its beautifully drawn and written pages. If Arrival Mind’s intention is to spark interest in a topic that the author is passionate about, drawing people into a deeper conversation, then he’s done an excellent job.