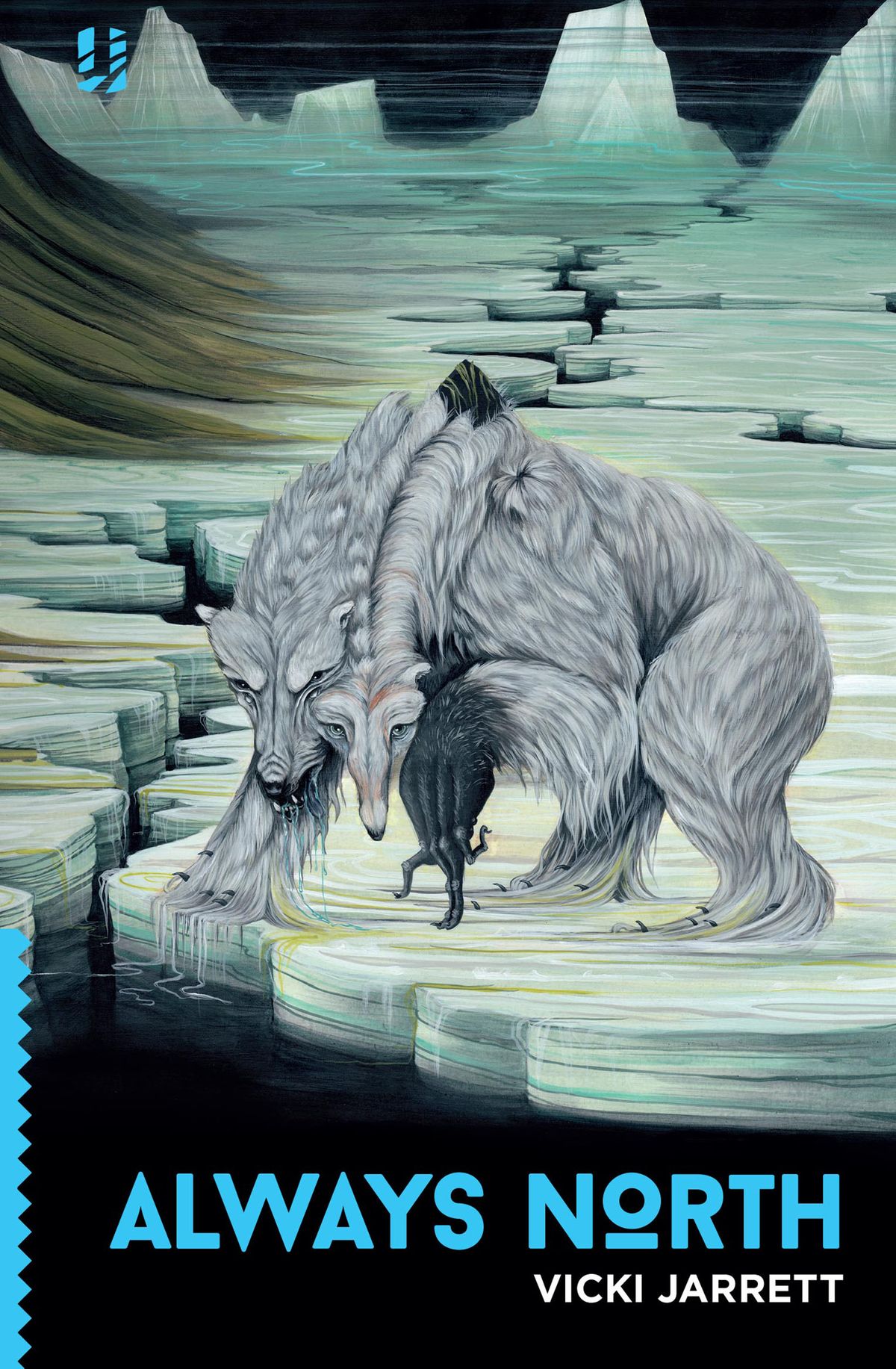 Polar bears need fatty foods to survive. They spend half of their lives hunting, using sea ice to chase seals. They will, however, eat walrus and whale carcasses, as well as garbage, just like their land-bound cousins. The creature on the cover of Vicki Jarrett’s new novel, Always North, is a bear from our nightmares. Unable to find food thanks to catastrophic Global Warming, might it stalk humans on a passing ship? The author of the 2015 story collection The Way Out now offers us a chilling puzzler that’s sharp with existential dread.

The story opens with Isobel in June of 2025. She’s a Scottish programmer for the company Seismic Systems, who agrees to test Proteus, a navigation tool, on the ship Polar Horizon. Joining her is Grant, co-worker and frequent recreational lover. The Polar Horizon is “the first commercial survey this far north since the Arctic Protection Agreement of 2020 banned all exploration and drilling within the arctic circle.” On this particular five week job, Grant doesn’t want sex distracting him from work. Isobel, having counted on such a reliable distraction, starts seeing her exhausted mother’s “auburn hair, angular features, pale skin and murky green-brown eyes” in the mirror. Luckily the delectable French second officer, Jules Guerin, is in her sights.

Isobel is aware of the cockamamie notion that a woman—with red hair, no less—is bad luck for a ship. Captain Peder Bjornsen’s true concern is that the Polar Horizon follows an icebreaker, the soviet Arkita Koch, which is powered by two nuclear reactors. A nuclear accident in the arctic, the crew realises, would shatter the imperilled ecosystem and flood the world with irradiated water. No mobile phones or internet capable devices are allowed on the mission, as per orders from Pilgrim Oil, the company paying for the hush-hush survey. And, to push the tension into Ahab territory, Bjornsen catches sight of a polar bear that he swears he’s seen before. Years ago, this bear killed his brother, Eyolf, and opened the captain’s face “like a can of meat paste.”

Jarrett, using Isobel’s first person narration, toys with reality and breaks up the monotony of ship life, to our benefit. In one scene, the protagonist runs on a treadmill featuring an on-screen forest just ahead. During the run, the forest starts burning down, which is low-hanging symbolism too ripe to pass up. The programmer occasionally says gorgeous things, like this description of constant daylight.

When there are no clouds the punitive white light glares like the radiation it truly is. It blanches the exposed skin on my hands and face. My outer edges fade to translucence, my bones glow silvery blue. I become an animated x-ray of myself. At other times, when the sun is shrouded and dips that crucial degree, the water turns from ultramarine to navy, the ice from white to azure, the fissures edged with jagged indigo shadows. All the colours of a painted ocean.

A strange, impossible occurrence marks the end of the book’s first third. We catch up with Isobel 20 years later, in a world that has the elite class building new lives on mountain slopes as if the drowned poor might sooth the rising seas. Her neighbour spends rationed electricity watching old David Attenborough documentaries, a sweetly depressing detail that kicks 2019 right in its media-obsessed heart.

When Grant re-enters Isobel’s life, we’re in the front row for her unique brand of PTSD. And yet, a researcher named Alex Forth may be able to help. The narrative’s final section becomes suitably fractured here and there, with Isobel losing time and slipping fully into the past. Some readers may begin to wonder if Always North contains more soft, flaky surface than narrative ice. Keep in mind Jarrett’s early focus on sex.

But this sexual tension provides a believable way to depict humanity’s dogged vibrancy as our species, and virtually all others, go extinct. When Isobel draws blood in her carnal enthusiasm—twice—the author craftily embeds a theme, one that loops elegantly and gives Always North substantial reread value.