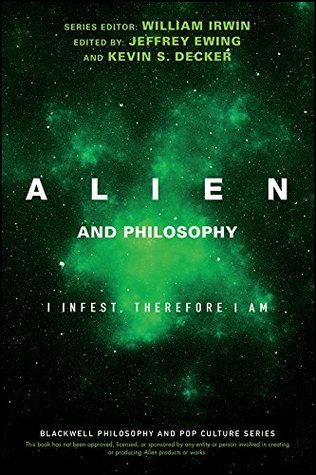 Alien and Philosophy: I Infest, Therefore I Am

Alien and Philosophy: I Infest, Therefore I Am

If you were the sort of child who could only handle maths classes when your teacher expressed all the problems using Transformers (If Optimus Prime has twelve energon cubes and Megatron steals five, how many does Optimus Prime have?) then the Blackwell Pop Culture and Philosophy Series must be just the thing for you.

Alien and Philosophy is the latest in an extended series of books. Its siblings include 24 and Philosophy: The World According to Jack, 30 Rock and Philosophy: We Want to Go There, Battlestar Galactica and Philosophy: Knowledge Here Begins Out There, and Veronica Mars and Philosophy: Investigating the Mysteries of Life (Which Is A Bitch Until You Die). Esteemed company indeed. In the words of Editor Jeffrey Ewing, the latest installment aims to “engage both the deeper layers of the Alien universe and what those layers mean on topics as diverse as identity and personhood, morality, and the political and economic forces of the Alien universe.” However, while it is easy to imagine Ridley Scott, and even James Cameron, considering the dramatic effects of a deeper philosophic meaning to Alien, Aliens, and Prometheus, it is harder to conceive that David Fincher or Jean-Pierre Jeunet looked to Hegel, Marx or Weber for inspiration for Alien3 or Alien: Resurrection. All five movies are discussed at some point in the book. The two Alien vs. Predator films, as well as the books and comics, are not.

What then, is the book’s purpose? The editors have asked several leading philosophers around the world to write short essays for the everyman exploring some philosophical facet of the Alien universe. We look at the morality (or lack of) of the Weyland (later Weyland-Yutani) Corporation, the philosophical issues raised by the existence of androids, the issues raised by the existence of aliens and genocide in the series, feminism and maternality, and gender politics as represented by Ellen Ripley. Each of these topics forms the basis for the several discussions revolving around the philosophical questions posed by the issue as seen in the films. These discussions are robust, but they’re only an introduction to each topic without many of the subtleties thereof, which have no point and lead to no definite conclusions. As a result, the book seems contrived, which in turn makes the reader feel like they’ve been tricked into reading a textbook.

About halfway through, the book starts to lose steam, and one imagines the editors racking their brains to find other philosophical issues to explore. Thus, in the second half of the book, we explore themes which seem only tenuously linked to either philosophy or the Alien universe, such as the influence of H P Lovecraft on the series, the pervasive human recourse to fear and horror, and whether Ripley’s latent maternal instincts make her a feminist. This is the point at which the reader begins to wonder if they’ve already read all the good bits and are now just into the filler.

What the book does not do is come up with any concrete points about any of the issues raised. However, one could say that was endemic of philosophy in the 21st Century, so maybe it’s a better primer than the editors realise. The philosophies covered also suffer from the editors’ selection bias, with plenty of Marx and Engels used to explain the evils of the Weyland-Yutani Corporation but nothing to provide an alternate viewpoint. The lack of opposing viewpoints pervades the book, and, in the end, this will leave the unsuspecting, first-time philosophy reader with the impression that all philosophers largely agree with one another, when of course they do not.

If you know nothing about philosophy but you enjoyed the Alien movies, would Alien and Philosophy be a good place to start? Yes, but only if you have your wits about you, and you don’t take it all as gospel. To imagine that philosophy was foremost in the minds of the filmmakers would be absurd, but, as a guide to the basics of philosophy, this book will suffice.