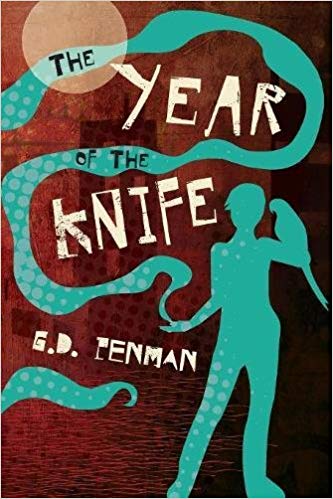 The Year of the Knife

The Year of the Knife

The Year of the Knife by G D Penman is a paranormal crime-fiction novel set in an urban fantasy world quite similar to our own. The action takes place in 2015 in a very different looking America, ruled by the British and accustomed to the use of magic within the government. The title refers to the calling card of a series of violent slasher murders, in which the killers scream, “It is the Year of the Knife!”

Agent Sully is the unsympathetic lead detective on the case. She hates everything: coffee, regional towns, old men, being cared for, nice apartments, appearing vulnerable, working and not working. She giggles at strange times, hisses during sex, never doubts herself and has a predatory nature when it comes to other women. But she is a good investigator and soon becomes entangled in a paranormal mystery, the likes of which no one has ever seen before.

The Year of the Knife is a creative story with many magical elements done well. The idea that magic is a substance that lingers after the act is intriguing. Spell casting and the commercialisation of spells is another refreshing spin on an old magical element. I loved the idea that power can be transferred between people, and I really enjoyed the rendering of taboos on the words and thoughts; words not able to be read and information that cannot be remembered.

But for a book essentially about magic, the world in which the characters live is surprisingly unmagical. Witches ride the train and shower in the bathroom, they use telephones and send letters, and they sit at desks and go through files. The use of magic feels somehow limited to a tool at work, a means of travel, or a weapon.

The story begins with a strong start, as an exhausted Agent Sully travels through the night to investigate a paranormal hostage situation and potential murder. But, from here, the plot never really gets off the ground. There are a few false starts as the action builds, but the pace is never maintained towards any kind of suspense.

Throughout the investigation, as the murders continue, there is no sense of urgency. Only the faceless are killed. There is nothing at stake for Sully except maybe a job she doesn’t seem to enjoy. She doesn’t really seem to be fazed at whether she solves the case or not. At the end of the novel, Sully has not changed, developed or grown in any way. She seems slightly more interested in a romantic relationship with the vampire, Marie, but that’s about it.

The text is dense and lacks readability, from white space considerations to sentence length, tense, phrasing and plotting. The author often summarises action after the fact. The writing style is simple and detached, creating distance between the reader and the action. All these aspects combined create a story that is flat and a character who the reader isn’t concerned for.

The depiction of “good” and “evil”—right and wrong—is a basic idea included in this novel. There is no exploration of what makes people behave in these ways. There is no grey area. I am a huge fan of both fantasy and crime/mystery plot lines, but a novel, especially one within the crime/mystery genre, only works when you can relate to either the killer, the killed, or those investigating the murder. There needs to be a solid puzzle at the heart of the narrative, with a rich interesting cast. Unfortunately, I could not connect with either of these necessary elements in The Year of the Knife.