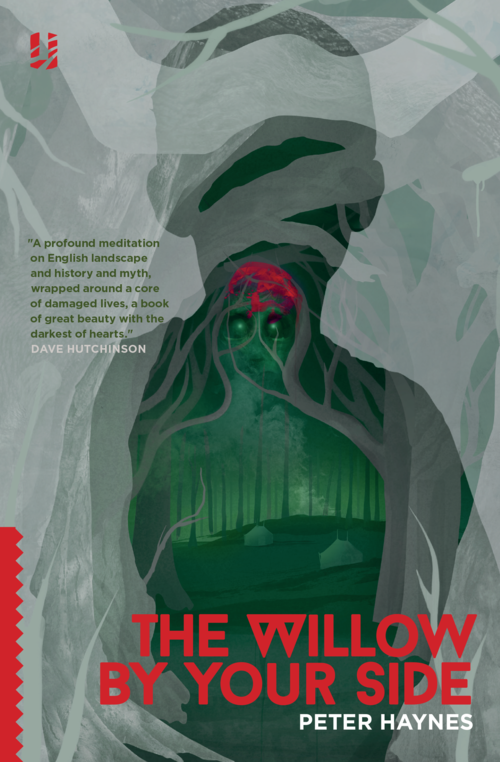 The Willow by Your Side

The Willow by Your Side

When thinking of English fantasy today, one may be forgiven for starting with Tolkien. The reach of Bilbo and Frodo has been long and glorious, not just throughout Middle-earth, but also throughout popular culture. However, before Tolkien turned over that fateful student paper and started to write, there existed another world of English fantasy: a stranger and darker world. This was the world of Lord Dunsany, of Lewis Carroll, and of C S Lewis. There, the elves were mischievous, not noble. Deals made were never as they seemed. Ordinary folk made their way there every now and again, as the lands of faerie themselves were always just a short walk from the fields we know.

In The Willow by Your Side, Peter Haynes takes us on a welcome-back trip to these magical paths. But as you might expect, the experience is not an exercise in nostalgia. Modern sensibilities and today’s harder edges intrude into the lands of the faerie. While the book follows a boy (name unknown) on his quest to find his lost sister in the 1930s, this story was not written by Enid Blyton. There are no faraway trees in the woods, but rather a magical lake where the children run to escape a father half-mad with PTSD. This lends the fairy-tale aspect of the story a new, refreshing angle.

So, the boy’s sister has gone missing. Suspicion falls on the father, who only the week before severely wounded her with a pitchfork whilst in a rage. The father is arrested, and this sets the boy off on his quest across the lake to bring his sister back.

The narrative is delivered in the first person and takes the form of the boy’s inner dialogue as he talks to his missing sister. While this style allows us to get to know the boy intimately, it gives every scene a sense of passiveness, as we only see what happens to the boy. The reader is not left to figure anything out on their own, but rather learns everything through the protagonist’s senses. Although this allows us to know his intimate thoughts, it also frustrates, as the reader is forced to view the story through an unreliable narrator. While it is a change from the textbook fairy-tale third person narrative, it prevents us from seeing the ‘big picture’.

There are two stories told in this novel, running concurrently. The prime narrative is the boy’s quest over the lake to rescue his sister. The secondary narrative shows us the events of the weeks immediately preceding the girl’s disappearance, as the children’s father descends further into madness. The twin-narrative structure is fun, but the closeness in time of the two stories (with the first ending only a day or so before the other starts) does not allow us to see any change in the boy’s character over time. The story leading up to the girl’s disappearance has life-altering consequences for the boy, but when we meet him at the beginning of the novel (starting the prime, later narrative) we do not see any evidence of this change.

Overall, however, this issue is minor, as it only becomes apparent at the end of the book. The story moves at a pace well suited to the subject matter, and the reader is never bored. The author shows the boy’s sense of wonder, fear, and his frailty well, and nameless though he forever remains he becomes indelibly etched in the reader’s consciousness.

The best part of the novel, though, is the author’s use of prose. The language used by the boy in his internal thoughts is gorgeous, with wonderful turns of phrase that make it a joy to read. Occasionally however, it seems older and wiser than the internal dialogue of a twelve-year-old. A genuine sense of ‘Englishness’ an Anglophilia pervades the book, and it is clear the author understood his subject well.

On the whole, The Willow by Your Side is a capable addition to the ranks of English fantasy, and should delight readers of Lord Dunsany, Hope Mirrlees, and C S Lewis.