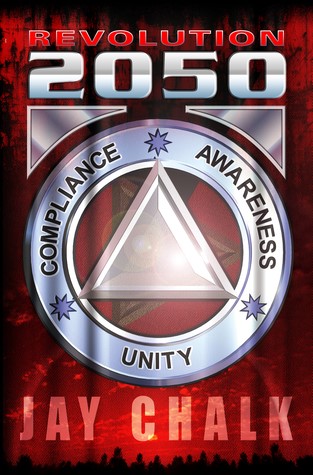 Imagine a world where the freedoms that our Founding Fathers fought so diligently to earn were suddenly stripped away, and by acting out “natural human rights” you were neither seen nor heard from again. This is what life is like for Samuel Moore living in the dystopian society within Revolution 2050 by Jay Chalk. Sam works as a school teacher for the Directorate, a new form of government that took over after the United States of America had another civil war. The Directorate is anything but a kind and giving government, feeding lies into the minds of the people to keep them their loyal subjects.

In the beginning of the novel, Sam has an internal conflict within himself, struggling to go against what he’s been taught, and what he has been teaching others: to obey. There’s an antagonising wait at the beginning that’s filled to the brim with foreshadowing. Yet, this soon dissipates after his meeting with Katie Spencer. Katie ends up being not only Sam’s companion and fellow “terrorist” but also his love interest.

Their love feels somewhat forced in the beginning, but as time goes on they end up respecting one another in ways they didn’t before. This love helps to develop their characters more, since it gives them both something to fight for when attempting to overthrow the overbearing and controlling government force. Character development is a very prominent key to Chalk’s success, as Sam’s thinking switches gradually from a supporter of the malicious government to the main force and leader trying to drag it down. He even later questions how he could have ever supported such a system.

A major theme within Revolution 2050 is the sense of freedom. Sam ends up going against what his doubts always said, and realises that the world he wishes for is a world that is free from Directorate control. There is a lot of repetition inside Sam’s thoughts some stating, “he was only one man.” Yet, Sam soon realises there are other patriots and believers who will proudly stand behind the now forbidden and terroristic Stars and Stripes. I believe Chalk does a good job of establishing the theme of sticking up for what you believe is right, of the path to freedom, through Sam’s and other characters’ actions.

Chalk does an excellent job of making me care about what happens to these characters, feeding off my emotional investment in them. I wanted more interactions between these characters to see more of what could happen with the many layered personalities. One of these complex and intriguing personalities includes a friend of Sam’s, ZZ. ZZ’s character goes through many changes throughout the book, and his true colours shine through in the end. Thus, adding to one of the overall messages and lessons within the book: sometimes people are not who they seem to be, and they can change.

I thoroughly enjoyed the allusions to other books that had been banned due to their content, books such as To Kill a Mockingbird and Fahrenheit 451. These novels added to the overall meaning of Revolution 2050, since they’re similar in that they share the same strong theme of fighting for what one believes in.

Although there are a lot of good aspects in the book, I wasn’t particularly fond of the jumping around between dates or time. Since I found myself sucked in most of the time, the illusion of the world that Chalk has created is lost when skipping ahead to a future time. Besides that, some editorial mistakes, and a bit of a slow start, I really enjoyed this book.

Revolution 2050 has a valuable message behind it, and it was very interesting to watch Sam develop into a loyal, brave, and determined young man who would do anything for those closest to him. I got drawn into the captivating and multifaceted characters, more so because this book teaches you that during war people change, and the world isn’t ever just black and white.