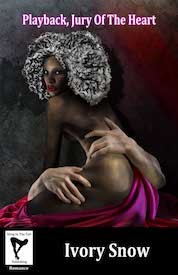 Playback, Jury of the Heart

Playback, Jury of the Heart

A refugee from the planet Bathox, Liam Keen, is in a relationship with retired actress Audrey, who is beautiful but increasingly aloof. The couple sleep in separate rooms and make love only on their birthdays and special occasions (and only under sufferance on Audrey’s part). It has not always been this way. When Liam first arrived in this world and “poured out of an acorn,” Audrey declared him perfect. Carrying emotional scars from Bathox’s intergalactic war, Liam was wary of falling in love with her (“Females are moths, they flitter from light to light.”). But initially Audrey stayed, and fall in love he did.

His struggle to cope with this unrequited love comes to a cataclysmic end when Audrey utters the words: “His name is Flint.” She walks out on Liam and leaves him a broken, dishevelled, unemployed mess. Nero, the person who first made contact with Liam after he emerged from his acorn, tells him to stop mooning over Audrey and puts him in touch with Sugar Sweetman, a “body artist” at Hoochi Mama and a former tarot card reader.

Liam and Sugar begin a kind of sexual healing, which involves many inventive positions and Liam sobbing a lot during climax. In time, his love for Audrey, which he comes to view as “black-eyed venom,” is diluted to almost nothing. With his heart mended, he begins to reclaim his existence, even starting a new job. But then comes the first twist: Sugar has violated her own rule and fallen in love with her client. Liam, fearing another dose of that black-eyed venom, shies from his healer and would-be lover and seeks the cold solace of another whore with more than a passing resemblance to Audrey.

Snow is sometimes prone to over-writing—“So he sat with a tomb in his heart,” she tells the reader, before expanding on this evocative image with 37 words of redundant prose—but ironically the sex scenes are spare and well-rendered; titillating without descending into the silly or absurd (always a risk with erotica). The narrative becomes tauter as the story develops, and the reader empathises with Liam as he goes on his unconventional journey to seek happiness. The ending, which is foreshadowed in the first chapter, does not disappoint.

One unusual thing drew me out of the story: the name of Liam’s home planet. “Bathox” is a brand of bath products and, even if Snow is somehow being ironic using this name, it is distracting rather than amusing. More thorough editing would also have weeded out the odd typo, grammatical error, and bizarre phrase (“calm table,” “boaty burp”). On the whole, however, this is a very satisfying read, one that deserved a punchier title.

Those who prefer a strong speculative element in their fiction won’t find Playback, Jury of the Heart to their liking; the SF/fantasy is more overlay than framework. But Andromeda Spaceways has always been a broad church in that regard, and it is easy to imagine a condensed version of this novella appearing in its pages, so it will likely appeal to most Andromeda readers. The e-book retails for $1.50, a reasonable value for a 10,000-word diversion, or it comes in miniature paperback for $6.87.

* A pseudonym, of course—Ivory Snow was a brand of laundry detergent available in the US that used Marilyn Chambers as a model for its packaging artwork in the 1960s (prior to her adult film career). This leads me to wonder if naming Liam’s planet ‘Bathox’ was more than a coincidence!