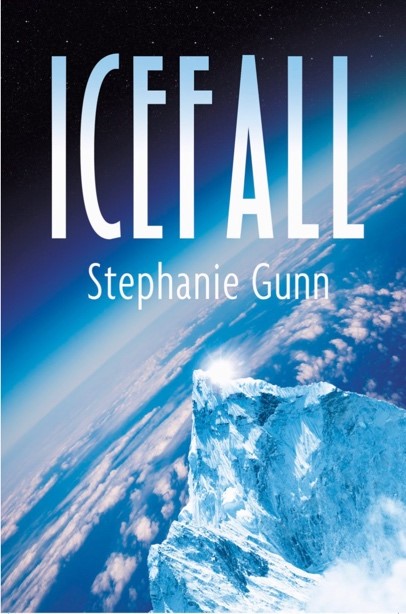 In his non-fiction book On Writing, Stephen King points out that “plumbers in space isn’t such a bad idea for a novel.” In Stephanie Gunn’s talented hands, it turns out “mountain climbers in space” is a pretty fine idea, too.

Icefall is set in an unspecified future, when the earth has been rendered uninhabitable through “earthquakes and war,” and humanity now lives on a series of terraformed colonies. The protagonist, Aisha, is aboard a spaceship with her wife, Maggie, destined for the planet Icefall, which was a thriving colony scientists and religious leaders alike thought could be “a new home, a new Earth” until a natural disaster wiped it out. Maggie, a gifted mountain climber (and supposedly a descendent of famed British mountaineer George Mallory), is on her way to scale the Mountain, Icefall’s tallest peak.

But from the opening lines we get a sense of Aisha’s isolation, both from her wife and the world at large. Most people can now experience life through VIR (virtual interface reality), which is “deeper and brighter and more” than anything regular flesh and blood eyes can offer. Aisha, however, stands among the 0.005% that cannot. Due to a post-traumatic stress disorder she suffers following a mountain climbing incident where she lost her hand to frostbite, her mind rejects the VIR implants.

Prior to losing her hand she had been a priestess of ONE (Order of the New Earth), which believes mountains are part of “the Mother, the creator who watches over us all” and therefore sacred. But her amputation is taken as proof the mountain “bit” her, a sign she’s no longer pure and, thus, ineligible to be a priestess.

We also learn early on that Aisha and Maggie had pieces of their heart muscles harvested, cultured and implanted in their ring fingers, and “the process resulted in the cells always beating with the rhythm of the mother organs.” This is a neat bit of sci-fi, the sort of novelty that’s easy to imagine being popular in a hundred years, but it’s also a convenient plot device that allows Aisha to keep tabs on Maggie when they are separated either physically or via VIR.

As the ship gets closer to Icefall, and Maggie prepares to scale the seemingly insuperable Mountain, Gunn slowly reveals through flashbacks what brought the couple to this point. There are hints threaded throughout the novella that Maggie and Aisha have not been entirely forthcoming with one another and a big twist is imminent. It’s not a bombshell, but it does tie up the forgoing story and attending themes in a neat bow.

Gunn’s narrative is often as cold as its subject matter, perhaps to give the reader a sense of Aisha’s bleak situation. It’s disconcerting at first, especially for a reader who prefers a more “cosy” authorial voice, but after a while the stark imagery and tight prose develop an icy verisimilitude.

On the surface, Icefall is an unconventional love story; an analogue for what it means to be devoted to a person with an all-engulfing obsession or duty. Below that, it meditates on how technology intersects with our lives. We are reminded again and again how the VIR world excludes Aisha. She detests her prosthetic hand, which she describes as feeling “numb” and like “ash” (and at one point it appears to try to strangle her normal arm). When Maggie’s VIR feed ends during a climb, those experiencing it along with her assume she’s dead and simply drop out—an ugly metaphor for the social media age, where people film atrocities on their phones rather than attempt to intervene.

Other technology—such as the holograms that aid and counsel Aisha on the ship, the bots that assist in every aspect of their lives, and a procedure that makes the novella’s climax possible—are viewed in a much more favourable light.

A handful of smaller themes are scattered through the novella—environmentalism and identity among them—but its central question seems to be, “What forms does spirituality take in an overwhelmingly technological world?”

In the midst of writing this review I learned Icefall had won the Aurealis Award for Best Science Fiction Novella of 2018. It didn’t surprise me. Gunn pulls off one of the hardest tricks in sci-fi: creating a believable future world and exploring the characters and themes within it while not inundating the reader with needless details.