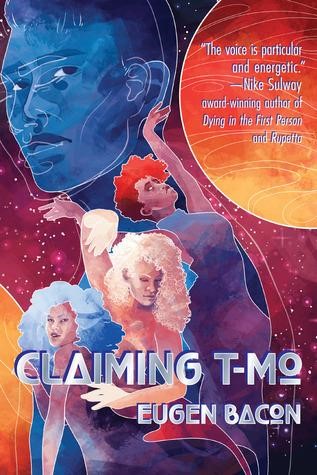 Claiming T-Mo, Eugen Bacon’s first full-length novel, explores the nature of identity and the question of whether who we are is static or constantly in motion. It’s deep and entrancing, written in a style that defies easy categorisation but leans in the direction of literary rather than traditional science fiction.

The title character, T-Mo, is the son of a priest and his child bride, born into a matriarchal society where it’s the mothers who name their children. However, when his father insists on giving T-Mo a second name, Odysseus, his personality is torn into two different identities fighting to define who he is.

While this conflict forms the heart of the book’s narrative, its ambit is much broader.  The novel explores the generations of women whose lives impact and are impacted by T-Mo.  It’s these women who voice the narrative of the novel, and their own lives, not those of the title character, give the novel its vital essence.

As the narrative moves between the different women who fill the story, they each lend their own unique voice to the writing. It’s a highly effective technique in a novel where each different style is appropriate to the character and is applied with a discipline and a consistency that adds life and colour to the story.

This approach, which builds on the experience of the author as primarily a writer of short fiction, enables the same setting and ideas to be explored from multiple perspectives. It also feels like an older “serial novel,” where each new perspective contains a self-contained, internally-driven story, which also gradually develops the novel’s overarching narrative. As the presence of the character Odysseus indicates, the story has a-story-within-a-story structure that rewards the reader with each new visit to the novel, just like Homer’s epic The Odyssey.

At first, the setting appears mundane, a small town in a non-descript location. Even its historical period appears difficult to define, as the early portions of the book have a timeless familiarity that could very well be from a number of different times or places on Earth. However, aspects of the author’s world gradually cause the reader to re-evaluate this setting once different planets are introduced, and teleportation and interstellar travel appear. The story expands on its setting naturally, as each narrator reports only what is relevant to her perspective and her experience, but for the reader it creates a pervasive feeling of unfamiliarity. This in turn forms part of the emotional backdrop of the narrative.

Partly because of this unfamiliarity, and partly because of a writing style that tends towards a more literary style, the novel is more work as a reader than its length would first suggest. In the interests of showing rather than telling, the author sometimes leaves the reader to infer the actions in a climactic moment. More than once, I found myself rereading a passage to ensure that I had grasped its full meaning. While this slows down the reader, the novel remains compelling throughout, and its emotion and mystery ensure it remains engaging.

Perhaps the only real weakness is an element of cliché that creeps in every now and then. Because there’s so much originality in the novel, these small portions of overly familiar material stand out more starkly. It’s most noticeable in the characterisation of the two “priestly” characters, who initially feel like stock characters for overbearing men of the cloth. Even this perception weakens, however, as the story progresses, and the character of the priest Novic develops into one of true complexity.

Without spoiling the ending, the conclusion of the novel, which turns the focus again onto the character of T-Mo/Odysseus, is both beautiful and an excellent resolution of the many disparate threads. The resolution, not only for the title character, but for the generations of women who have accompanied him on his journey, gives a wonderful novel its deserved completion, one that leaves the reader fully satisfied.

Claiming T-Mo is an excellent piece of experimental fiction. It is both beautiful and engaging and provokes a genuine emotional reaction in the reader. While this novel breaks from the traditional conventions of science fiction, the manner in which it reimagines the genre brings a unique and compelling voice to the story. I would recommend it for both readers of literary fiction interested in exploring a more speculative genre and for readers of science fiction who are looking for an emotional and literary experience full of original ideas.